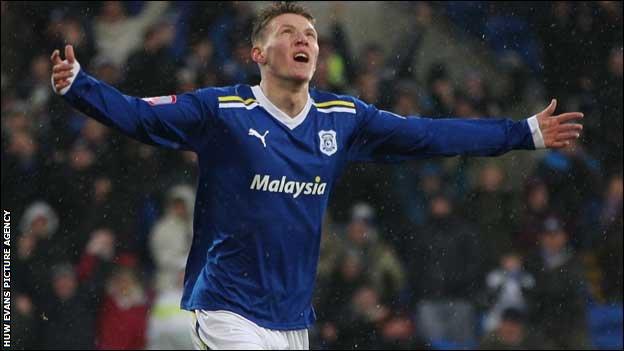 It is not just the majority of south east Wales that will be cheering on Cardiff City in Sunday's Carling Cup final against Liverpool - many in South East Asia will be honorary Bluebirds too.

But not only is Malaysia's ninth richest entrepreneur using some of his estimated £800m fortune to bolster Cardiff's Premier League promotion bid, he is also personally kick-starting grassroots football in his homeland using the Cardiff City brand.

The long-term goal of Cardiff's hierarchy is to supplement the Malaysia national team and significantly improve their Fifa world ranking of 150.

Such is Vincent Tan's financial commitment and desire to raise standards in Malaysian football that football-loving Malaysians have bought into his Cardiff City vision, so expect many to be supporting Malky Mackay's underdogs this weekend.

Cardiff's powerbrokers, in turn, hope the profile enhancement in this relatively untapped market could prove profitable.

"Cardiff probably wouldn't have registered on the scale two years but, on the investment of two significant Malaysian businessmen and their link with Cardiff, the club has become significant in Malaysia and is growing all of the time.

"You even see a few Cardiff city shirts over there now - not as many as Manchester United and Liverpool, though.

"I'm sure our new fans in Malaysia will be watching Sunday's game with interest - especially against a massive club like Liverpool.

"There is huge interest within the Malaysian media as about 30 of them are flying in to report on our progress in the final."

Cardiff were taken over by their Malaysian investors just after their last visit to Wembley, the Championship play-off final defeat to Blackpool in May 2010.

Former Cardiff winger Kevin Cooper has relocated to Malaysia to manage Cardiff's 1MCC - One Malaysia Cardiff City - a concept Whiteley believes could reach 100,000 children throughout Malaysia over the next three to five years.

The first Cardiff City Malaysian youth league will begin in April as the Welsh club broaden their horizons to the land of their property magnate owner.

"Clearly one of the attractions for Vincent Tan and Dato Chan Tien Ghee is using the link with Cardiff to develop grassroots football in Malaysia through the medium of education," said Whiteley.

"The potential is incredible. Grassroots football in Malaysia is not wonderful, hence their world rankings, so our owners are seeing this as a way of improving the standards very quickly and spreading the Cardiff City brand.

"I'm not aware of any similar partnership so I guess there is an element of uniqueness.

"It is slightly different from the norm, where you have oversees investors come in but they are only really concerned about their profile and the profile of the club they are investing in.

"The primary aim for our owners is to achieve success for Cardiff City but also to use that as a method to promote Malaysian football.

"The ultimate long-term success is to have Cardiff in the Premier League and Malaysia significantly improved in the world ranking.

"It shows the fans their commitment. The message [the owners] have given us is that they are here for the long-term. That's why the manager has a long-term deal at Cardiff as they have long-term plans for the club."

Former Cardiff captain Scott Young, the hero of their famous FA Cup third-round win over then Premier League leaders Leeds United in 2002, is the figurehead of Cardiff's community scheme, which employs 50 staff and coaches 50,000 children annually.

"They are mimicking our Cardiff community programme in Malaysia," said Whiteley.

"Our coaches will go into the community and schools to use football to bring children together and providing an education framework around it.

"Over the next 12 years, the aim is to use our coaches to train indigenous Malaysian coaches so they can coach on behalf of Cardiff City.

"The question we always get asked when we're in Malaysia is when can we have Malaysian players playing in the Premier League? Their ambition is so high.

"They probably watch more football then we do in Britain. They watch football from all over the world 24/7, especially the Premier League.

"It is a massive market and it is exposure the brand needs. The only way to tap into it fully is to take the team to Malaysia and let the locals see us play against the Malaysian national team in front of a crowd of 50,000 screaming Malaysians.

"If we were to get to the promised land, our profile would go through the roof in Malaysia, as well as around the world, as the revenue opportunities and brand exposure in the Premier League are second to none.

"Given we are owned by high-profile Malaysian businessmen and given what they are doing at grassroots levels in Malaysia, that would have massively positive implications for Cardiff City.

"When teams like Chelsea, Liverpool and Manchester United play in these places, there's a massive retail frenzy, so it will open up a whole new market for us and it will be a significant revenue driver."