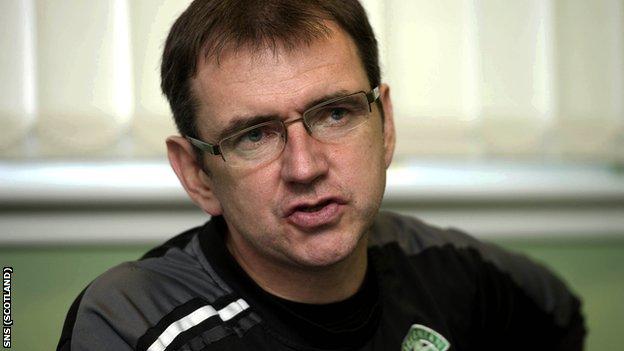 Hibernian manager Pat Fenlon is stressing that his underperforming players must understand that they are battling for their futures.

The Easter Road side are level on points with Dunfermline at the foot of the Scottish Premier League.

"Everbody's job is on the line," Fenlon told BBC Scotland the day after a 4-3 defeat at Motherwell.

"People at this club have to realise that there are consequences in not winning football matches."

Fenlon has witnessed his side win just one of their 11 league matches since he took charge in late October.

He insists that he knew the enormity of the task when he arrived in Edinburgh, claiming that the club's problems have been there for all to see for some time.

"Hibs have been struggling for a while," he explained.

"You do your homework before you come in and there is no doubt it has been a tough place for the last couple of years to manage and for some of the players as well.

"I knew that coming in. My eyes were wide open to that."

Hibs have lost nine goals in their last two matches and travel to Kilmarnock this Saturday, with Fenlon demanding his players cut out the defensive blunders that have dogged them this season.

"People make mistakes and you can live with mistakes but you can't keep compounding mistakes by making other ones," said the Irishman.

"It's about being up for the scrap, up for the fight. Whoever is up for it more will come out on top.

"We've got to be a bit more positive and a bit more aggressive all round.

"We've got to get the players confident and trusting in what they're doing, no matter what happens in the game.

"At the moment we're reacting negatively, not just getting back to the game plan that has served us previously."