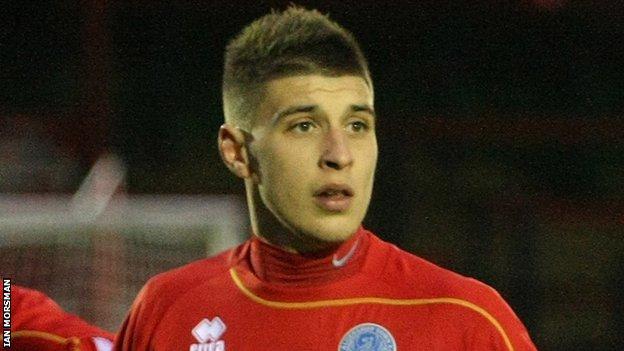 Aldershot Town winger Adam Mekki says he is determined to keep his place in the starting line-up.

The 20-year-old has started the club's last four games in League Two.

He told BBC Surrey: "I need to keep my feet on the ground and keep working hard as there's always players ready to take your place.

"There's healthy competition for places but it's always pushing me to do well. I want this run to carry on for as long as possible."

Academy graduate Mekki has thanked the club's supporters for giving him a standing ovation when he was substituted in the 2-0 win over Southend on Tuesday.

"The fans were unbelievable," he added. "Any player and any young player that plays for Aldershot and wears the badge with pride, the fans will always appreciate you working hard for the club.

"I'm here to do my thing and help Aldershot get as far as we can."

Mekki has been given an opportunity in the first team following the sale of Jermaine McGlashan to Cheltenham Town, and Shots boss Dean Holdsworth has been impressed with his contribution to the side.

"Mekks has stepped into the spotlight and he is a player who's got a hell of a future in the game," Holdsworth said.

"When I look around and see clubs playing fortunes for potential, Mekki's in front of those people. He's exciting. He'll grow and get better."

Meanwhile, 18-year-old winger Jordan Roberts has signed a deal that commits him to the EBB Stadium for the next two-and-a-half years.