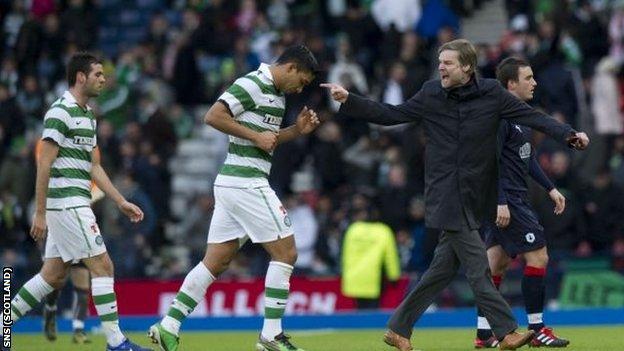 Falkirk manager Steven Pressley has been given a four-match touchilne ban for confronting the referee during the Scottish League Cup semi-final defeat by Celtic.

Pressley was dismissed from the dugout after storming on to the pitch at half-time to remonstrate with referee Euan Norris.

He complained of poor refereeing in last month's 3-1 defeat at Hampden.

Pressley was severely censured for comments made afterwards.

"I'm so disappointed for the players. We gave so much to the game and it was decided on two debatable decisions," the former Hearts captain said after the game.

Pressley was unhappy with the award of a penalty, converted by Scott Brown, after Bairns skipper Darren Dods had grappled with Thomas Rogne at a corner kick.

And he also objected to the free-kick given to Celtic, that was duly converted by Anthony Stokes, who later added a simple tap-in.

"I'm not proud of that," he said of his sending off. "I need to handle these situations slightly better but emotions were running high and I'm very passionate.

"I just wanted justice for my players. The issue for me is would it have been given in the other box? That's the question for me."