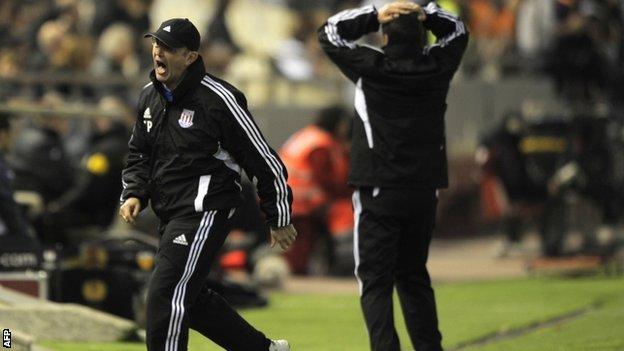 Pulis left nine-first team regulars out of the squad that travelled to the Mestalla and only named four of the permitted seven substitutes.

But he said: "We actually had four captains of their countries out there and the team had more experience than the one at the Britannia Stadium."

The team I played today is the team that have played the majority of games in Europe. I don't know what all the fuss is about

Stoke were backed by 4,000 supporters who had made the trip from Staffordshire to the east coast of Spain for one of the biggest nights in their club's history.

And some disappointed fans voiced their concerns about what they believed was an under-strength team selection from Pulis at the Mestalla.

However, the Welshman insisted the plucky display by his much-changed side, which created a number of great chances - notably for Kenwyne Jones, justified his decision.

Pulis said: "The team I played today is the team that have played the majority of games in Europe. I don't know what all the fuss is about.

"But negative press sells better than positive press. We're disappointed because it's been such a positive run, such a great adventure for everyone at the club.

"This has whet my appetite for more and I just pray to God that we will get the chance again in the next year or two.

"To give Valencia two games like that shows just how far this football club has come. I, for one, have relished this competition."

Meanwhile, defender Robert Huth claimed Stoke's performance proved they were determined to progress to the next round of the competition.

"If you watch the game, it's not Stoke to give up. We made a few changes to hopefully improve the team, but we lost to a good team," he said.

The German also praised the vociferous contingent of visiting supporters.

"They have been brilliant," added Huth. "There are more than 4,000 of them and everywhere you looked you could hear them. We thank the supporters and hopefully we will see them again soon somewhere like this."