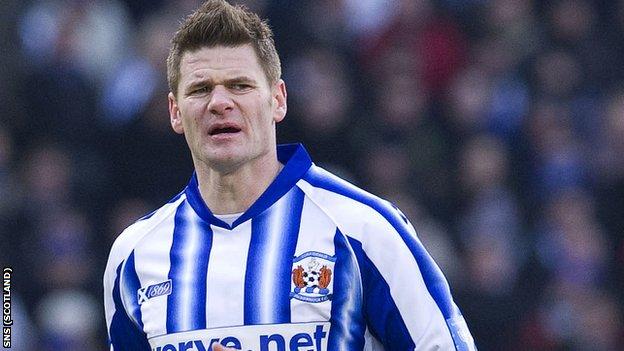 Kilmarnock's Michael Nelson thinks the absence of captain Manuel Pascali has had an adverse effect on the team.

The Italian defender broke his leg in training earlier this month and will miss the rest of the season.

"Since I came to the club you can see the influence he had straight away," Nelson told BBC Scotland.

"It's hard to replace that but he tries to be around the place as much as he can. He tries to be there to give the lads a boost."

Since Pascali's injury, Killie have drawn with Hearts, beaten Rangers and lost to Dundee United.

Kenny Shiels' team have home games against Hibs and St Johnstone and a trip to Inverness before the League Cup final with Celtic on 18 March.

Nelson, who arrived from Scunthorpe in January, has been partnering Mo Sissoko in central defence but said Pascali is still making his presence felt.

"He's in and around the training ground and he's in the dressing room before games," he added.

I'm still waiting on an apology from the referee. He hasn't rung and I thought he might ring to apologise

"He's still in good spirits, he's not too down and I think he's just counting the days until he gets that plaster off and start his rehab."

This season Killie have been the fall-guys when other teams have been on a poor run looking for a much needed win.

Inverness Caledonian Thistle, Dunfermline and also Hibs in the Scottish Cup have found success against the Ayrshiremen.

"Hibernian will have watched us on Tuesday night and they'll think wow we've got a good chance here against that team and they would be right because we were so below par," said Shiels. "Added to that Dundee United were exceptionally good."

Killie capitulated at Tannadice after Kelly's sending off for a last-man challenge when the game was goalless.

And Shiels is surprised that referee Craig Thomson has not been in touch to apologise for his decision.

"I'm still waiting on an apology from the referee. He hasn't rung and I thought he might ring to apologise.

"He got the sending-off wrong and that was quite obvious.

"I thought [getting in touch] was protocol but it hasn't happened much to us because we have a really good disciplinary record.

"It mustn't be the protocol but I didn't realise that."

Shiels will not take the case to the Scottish Football Association, claiming the Ayrshire club's appeal would be a waste of money.

He said: "We are not appealing it because I don't think we are a big enough club to win the appeal.

"Case history tells you that I'm losing £1,000 of the club's money so I have declined to appeal it.

"We will just take the medicine - even though we don't feel as though it's just, we are going to take it and get on with it."