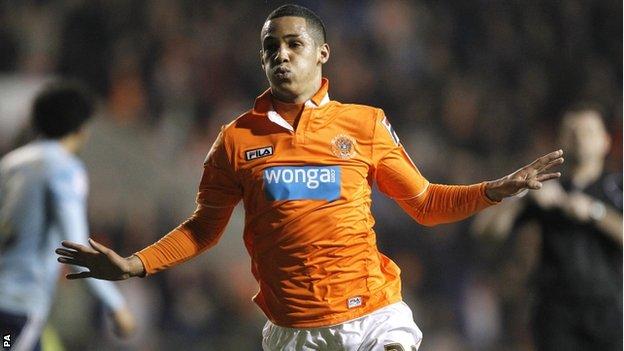 Matt Fryatt's last-minute goal earned Hull a draw with Blackpool at Bloomfield Road in the 100th competitive game between the clubs.

Blackpool were on course for victory after a stunning left-footed strike from Tom Ince in the 27th minute.

However, Fryatt netted late on from close range to ensure Blackpool remain in fourth place.

Hull missed out on a seventh clean sheet, which would have broken a 104-year-old club record.

The game was fairly even in the opening exchanges but the deadlock was broken in spectacular fashion.

Driving deep into the Hull half, Ince played a smart one-two with Kevin Phillips before, with the outside of the boot, firing past Vito Mannone from just outside the box for his fifth league goal of the season.

Phillips placed a header just wide and on-loan Roman Bednar, shooting right-footed across goal, forced a fine left-handed save from Mannone either side of half-time.

The goalkeeper - on his 24th birthday - was in action again minutes later to keep out Phillips, with Hull leaving gaps at the back as they attempted to get back on level terms.

With nine minutes remaining Liam Rosenior whipped in a dangerous cross from the Blackpool right but substitute Josh King could not get on the end of it.

Two minutes later, King shot straight at Hull keeper Matt Gilks, a miss that proved decisive as Fryatt despatched from close range after a corner was only partly cleared.