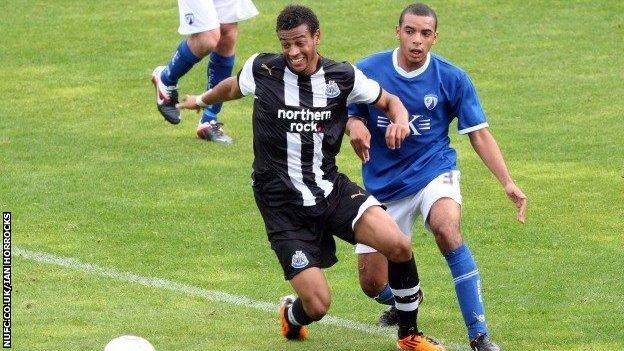 Adjei, 20, has been training with Pools, and played the full 90 minutes of the 1-0 reserve team defeat by Rotherham United on Wednesday.

"Sammy's been in training with us," Cooper told BBC Tees.

"He looked sharp, he's very quick and we might try to follow that up as he's different to what we have."

The Sweden under-17 international has yet to make a full senior appearance for Newcastle following his switch to Tyneside from Norkopings in January 2009.

He missed almost all of the 2010-11 season with a hamstring injury, but returned to action in September of last year.

"I've really enjoyed working with him, he's been with us for a couple of weeks," added Cooper.

"He's had a hard time at Newcastle United, I think he's had major problems with his hamstrings, but he looks much fitter now and stronger."