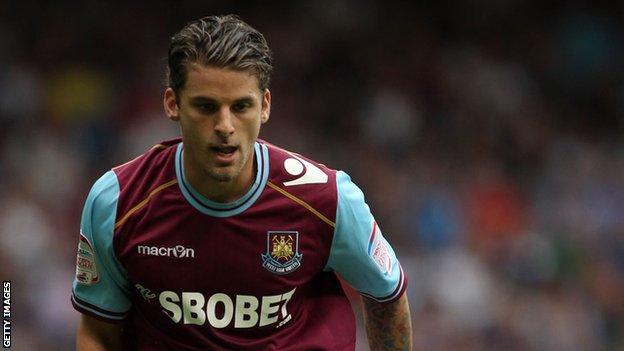 The 27-year-old England international has not played for Spurs since November 2010 and was on loan at West Ham earlier this season.

"David is a friend of mine. He needs to play football," Robinson told BBC Look East. "He would be perfect for us.

"He knows where I am. We are only 40 minutes from where he lives and we both have the same agent."

He spent the second half of the 2010-11 season at Birmingham City, where he scored once in 15 games.

And he returned to the Championship earlier this term, playing five times for West Ham before undergoing surgery on a knee injury in October.

You've got to be realistic. It might be something we can pull off and I'll definitely ask the question should it come up

He was expected to be sidelined for six months but was a surprise inclusion when Tottenham boss Harry Redknapp named his 25-man squad for the remainder of the Premier League season.

In 2008, Spurs paid £15m to take the former Arsenal trainee from Blackburn and he has gone on to make 62 appearances for the north London club.

"We've not approached or spoken to Tottenham," added Robinson. "I worked with him at Blackburn and we've always stayed in touch.

"He's someone I respect immensely and someone I know has got an amazing gift.

"If he ends up playing at this club we'll be very fortunate but that's a long way away.

"You've got to be realistic. It might be something we can pull off and I'll definitely ask the question should it come up."

The Dons have already signed one former England player this season, bringing in