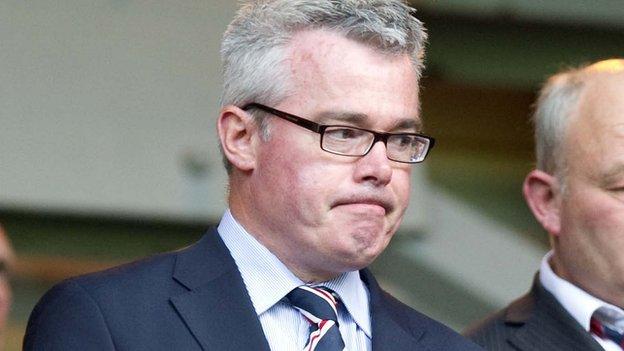 Former Rangers director Paul Murray has met the club's administrators, Duff and Phelps, to discuss his proposal for a consortium to take control at Ibrox.

Murray first indicated his interest in a bid on 14 February, the day Rangers fell into administration.

His meeting on Friday morning was the first face-to-face contact he has had with the firm.

Officials from the administrators have also spoken to Sale Sharks owner Brian Kennedy about a possible bid.

Murray, a chartered accountant, has previously said that he would not work with current owner, and now former chairman, Craig Whyte.

"Would I come forward and help the club? Yes," Murray told BBC Scotland last week. "But I can't do that on my own. I would need to work with others.

"Would I be prepared to do that alongside Craig Whyte? No."

I can only say I'm sorry to the Rangers fans

Rangers were first forced into administration over an unpaid tax bill of £9m - accrued since Whyte bought the majority shareholding from Sir David Murray for £1 last May.

But since then, BBC Scotland has learned that the tax owed to HMRC is more than £13m and could rise to £15m by the end of February.

Meanwhile, director Andrew Ellis has apologised to fans for his part in bringing Whyte to Ibrox.

The London-based businessman introduced Whyte to previous owner Sir David Murray in November 2010, after his own bid to buy the club had fizzled out.

"I can only say I'm sorry to the Rangers fans," said Ellis.

"Bringing Craig to the table was done in good faith and like a lot of other people I feel let down by him.

"I took Craig to meet Sir David Murray in the south of France and that's when talks began and I'm distraught that it has ended up like this.

"My interest in buying the club had ended due to the potential cost of the impending tax case but I had met Craig via the Cadbury family and was told by people that he was a very successful and wealthy businessman who was interested in buying Rangers.

"He appeared to have the money, he showed me proof of funds and told me about the numerous companies he owned.

"I was absolutely devastated last week to see the club go into administration with jobs at risk."

Ellis also revealed that he was taking legal instruction, claiming Whyte has reneged on a deal to hand over almost 25% of his shares in the club.