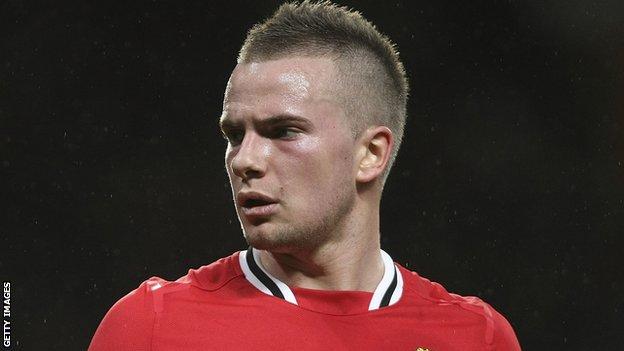 Manchester United midfielder Tom Cleverley is awaiting the results of a scan on a foot injury.

"He got a knock. We sent him for a scan but we don't think it's serious," manager Sir Alex Ferguson told MUTV.

Uncapped Cleverley is in the England squad for next Wednesday's friendly against the Netherlands at Wembley.

The 22-year-old played in United's 2-1 Europa League defeat by Ajax at Old Trafford on Thursday, but was replaced by Paul Scholes just past the hour.

Injuries have limited Cleverley to nine games for his club this season, and it is thought this is a fresh knock.

He suffered a foot injury at Bolton in September that ruled him out of action for six weeks.

His comeback lasted for just two matches then an ankle injury sidelined him for four months, before returning for the first leg at Ajax in Amsterdam last week.

Caretaker England manager Stuart Pearce named Cleverley his squad on Thursday and was at Old Trafford to watch the Europa League game.