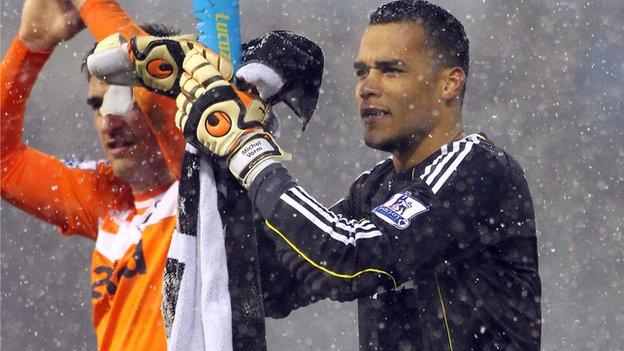 Goalkeeper Michel Vorm says England are wrong to ignore some of his Swansea City team-mates for Wednesday's friendly with The Netherlands.

Nathan Dyer, Scott Sinclair and Danny Graham had been touted as possible inclusions in the England squad.

Vorm, who will be in the Dutch squad at Wembley, is surprised they have been overlooked but believes their international debuts are imminent.

"They can play at any level and help England get better results," he said.

"Players like Nathan Dyer and Danny Graham can score a goal out of nothing. But England have so much quality already in the team it's very hard to get into it."

Dyer, Sinclair and Graham all scored in Swansea's 3-2 win over Arsenal in January, watched at the Liberty Stadium by current caretaker manager Stuart Pearce.

"I'm a bit surprised they have not been selected," added Vorm. "The way we play and the level of quality they perform to in the Premier League they can play at any level.

"But it's only a matter of time and the only thing they can do is work hard, improve their game and score goals.

"We will see what happens but I think in the future you will see them in the England squad."

Vorm joined by Maarten Stekelenburg of Roma and Newcastle United's Tim Krul as the goalkeepers named in the Dutch squad on Friday.

The Swansea stopper and Krul have been bracketed among the Premier League best goalkeepers this season, and Vorm hopes to press his claims for a place in the Dutch squad for the Euro 2012 finals by featuring at Wembley.

Stoke have lost four Premier League games in a row now, but the thing about them is that they are never that bad even when they lose, and they are always extremely competitive.

"A game against England at Wembley is something special and I hope to play," said nine-times capped Vorm.

"Every player who's not certain of their place in the squad wants to impress the manager. Games like this are called friendly matches but they are a chance to show the manager what you can do."

Before focusing on next Wednesday's international, Vorm returns to Premier League duty on Sunday after a two-week break as Swansea travel to Stoke.

The Swans nullified Stoke's renowned aerial strength by securing a 2-0 win in October as Vorm collected one of his nine clean sheets this season.

"In most positions we are better than them, but the way they play is very hard," said the 28-year-old.

"You have to concentrate but we played well against them at home and you know what to expect. We've trained hard all week to make sure we're ready for the game but it's going to be a tough one."