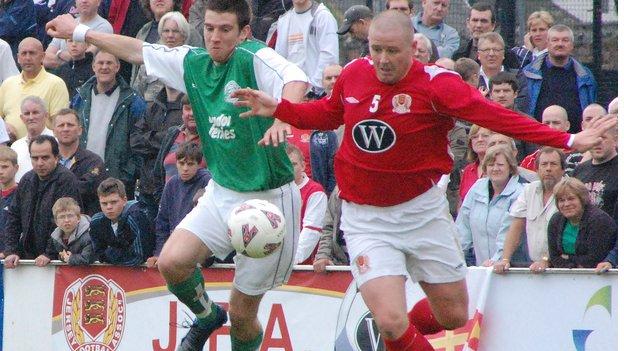 Guernsey will face Jersey in the semi-finals of the inaugural International Shield football tournament in Gibraltar this summer.

The two sides will play at Gibraltar's Victoria Stadium on Thursday, 28 June, with the winners facing either the hosts or the Isle of Man.

The event has been organised to give the islands more competitive matches.

The tournament was confirmed after a meeting in Gibraltar between the four islands earlier this week.

"We've been talking about a competition such as this for some time and it is great to be in a position where we are now looking to book flights and get the ball rolling on an exciting venture.

"It is envisaged that one day this tournament could become something similar to the Island Games football tournament, with more islands getting involved."

For some time the four islands had been hoping to try and get more representative football.

Currently, the three islands around the UK have teams that , while Gibraltar have failed to gain admission to Uefa in order to play international football.

The teams play in the bi-annual Islands Games and, between the four of them, have made the final of the last 10 tournaments.

Guernsey have expressed an strong interest at being responsible for the 2014 version of the event.

"If it was to run in every non-Island Games year, it would effectively giving us a representative competition at the end of each season," Schofield said.

"I'm pleased that Guernsey will very likely host this tournament on its next staging, planned for 2014."

The FA have sanctioned the tournament while Gibraltar will cover the travel and accommodation costs for the three islands. Guernsey have yet to decide who will lead their team in the tournament.

They appointed former skipper Kevin Graham as their manager for the Muratti semi-final against Alderney next month and the final, should they get there, against Jersey in May.