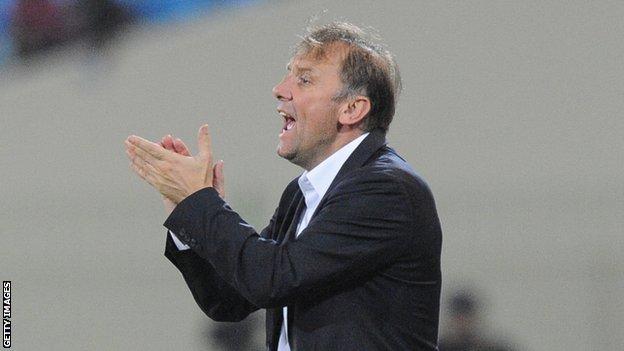 Ghana coach Goran Stevanovic has revealed deep divisions within the squad, saying some players used witchcraft against their own team-mates.

The Serbian made his claim in a leaked report on the Black Stars' failure at the 2012 Africa Cup of Nations, where they were beaten by eventual winners Zambia in the semi-finals.

"We all need to help in changing some players' mentality about using 'black power' to destroy themselves, and also make sure we instil discipline and respect for each other," the coach said.

In a report delivered to the Ghana Football Association's (GFA) executive committee, Stevanovic added: "After losing to Zambia, there arose so many accusations amongst the players.

Some players played to achieve personal fame, prominence and excellence

"I have learnt great lessons from African football and also about Ghanaian players' behaviour on and off the field.

The coach did not name any specific players in that part of the report and the GFA is refusing to comment on the matter, saying it does not discuss any issues arising from leaked documents.

"It has always happened, but players have used it to protect themselves and normally in search of luck," Sarfo Gyami, who was a member of the Ghana side at the 1992 Nations Cup, told BBC Sport.

"I have never heard of a situation when players have used it against their own colleagues. That is a very bad situation."

The image of Ghana's team during the Nations Cup was one of unity, with videos and pictures being beamed from the camp in Franceville of players holding late night prayer and singing sessions as a sign of their strong bond.

But both Stevanovic and GFA president Kwesi Nyantakyi say there were deep divisions.

"During the competition we observed that some players played to achieve personal fame, prominence and excellence to the detriment of the team," Nyantakyi said at a press conference earlier this week.

"We also had complaints from some senior players, accusing some of the junior ones of disrespect."

Stevanovic's position is under serious threat, with the GFA reviewing his contract and due to make a decision on his future in two weeks.

However, he will lead the squad when they play Chile in the United States on Thursday.