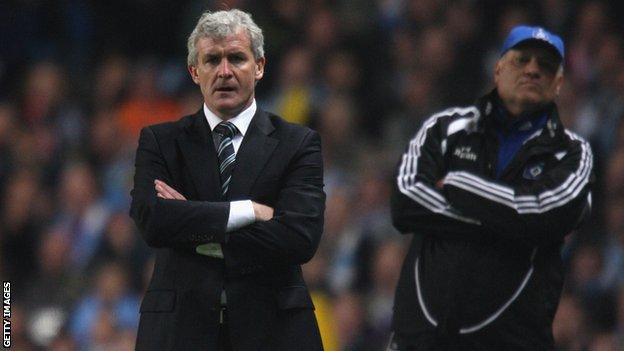 QPR manager Mark Hughes quit the Cottagers in the summer after he claimed they lacked ambition.

"We have been in this league for years now and QPR came up in the summer," the Dutchman stated.

"We are established and they have to try to get established in the next couple of years."

Despite more than one relegation fight since being promoted to the top flight in 2001, Fulham have cemented themselves as regulars in mid-table or better, and were beaten finalists in the 2010 Europa League final.

QPR are in their first Premier League campaign in 15 years and sit in 16th place in the table, level on points with Wolverhampton Wanderers who are in the final relegation spot.

Fulham's own return to the top division followed the arrival of chairman Mohamed Al Fayed in 1997. When the Egyptian took over, the side were in the third tier of English football - though they had just won promotion from the bottom division - and had not competed in the top flight since 1968.

Despite QPR chairman Tony Fernandes spending more than £10m in the January transfer window, including £4m on Fulham striker Bobby Zamora, Jol insisted he is working under the best chairman in the league.

"At Fulham we are quite sound, we're healthy and we have got the chairman," the Dutchman said.

"Every time we want something, like Bryan Ruiz - although maybe not the reported £10m fee - he has been very willing to help us because he is almost a legend here.

"He wants to help us and I don't think you can find a better chairman than him.

"Here I have to go to his office every two or three weeks and the only thing he always asks is 'can I help you?' and 'are there any problems?'

"If there are any problems he will help us, which is what he did with signing Pavel Pogrebnyak on transfer deadline day last month."