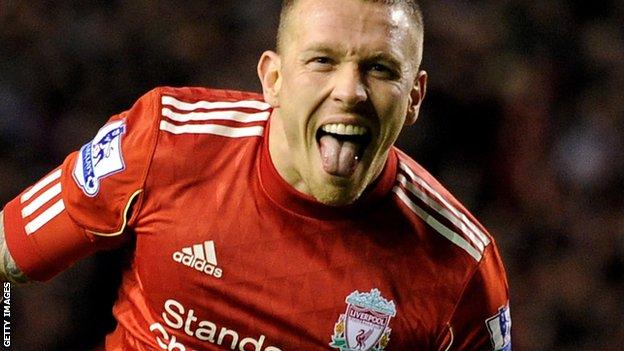 Bellamy spent last season on-loan at his hometown club and has conceded he is "not looking forward" to facing the Bluebirds at Wembley on Sunday.

"I don't believe that at all, he's a winner in himself," said Hudson.

"It's his boyhood club [and] I'm sure he'll want us to do well but I'm sure he will want to win."

The ex-Wales captain rejoined Liverpool on a free transfer during the summer and has scored 10 goals for the Reds since returning to Anfield.

"He's a great lad and he'll be there to give his best for Liverpool," said Hudson

"I'm sure he'll be driving them on and telling them all about us before the game."

Bellamy will be vying with Luis Suarez and Andy Carroll for a starting spot at Wembley and Hudson has warned his side will have to be on top of their game.

"It's a great forward line they've got," said Hudson. "They've got goals in them and have started to score more recently.

"If we're going to have any chance of winning the cup we've got to be on our game and keep their chances limited.

Hudson insists he is fit for Sunday's final after missing the last six matches because of a calf injury.

The skipper and midfielder Stephen McPhail will have fitness tests in London on Saturday ahead of the game.

The former Charlton defender admits he has been worried he will miss out on Cardiff's first ever League Cup final appearance.

"It's been frustrating. I tried to come back the week before last and it [the injury] broke down on me," he said.

"I tried to do things too soon. That's how I am, a bit bullish maybe.

"In the back of your mind you think you are going to miss it, such a big occasion.

"I had a chat with the physios and took a different aim of things and it's worked and I'm grateful to them for giving me a chance to be involved."

Hudson has experienced the pain of losing with Cardiff at Wembley, where he captained the side in their Championship play-off defeat against Blackpool in 2010.

But Hudson says the pressure will be off Cardiff against Kenny Dalglish's Premier League side and the Bluebirds can cause an upset.

"You walk away with a real sinking feeling," said the former Crystal Palace player of the Blackpool defeat

"But it's a different occasion. We are looking forward to this. Whatever the outcome we are going to go out there and give a good account of ourselves.

"Whatever happens we'll be pleased to be involved with it. If we get the chance to win and lift that trophy it will be unbelievable for the club and everyone involved.