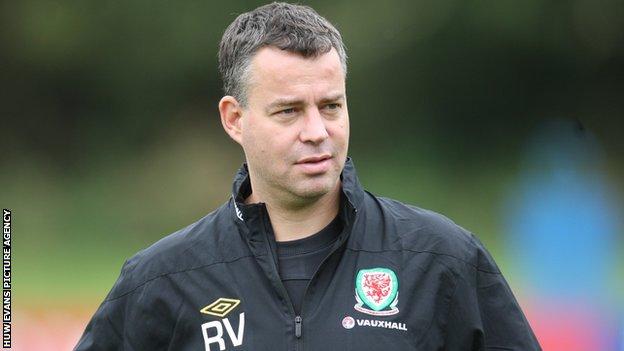 Raymond Verheijen has announced that he has resigned as Wales assistant coach.

The Dutchman revealed on Twitter that he was quitting, citing "political and destructive games" as his reason.

Verheijen had been due to be part of the managerial team taking charge of Wales in the Gary Speed Memorial game against Costa Rica on 29 February.

"Earlier today I have informed the FAW I will resign," he tweeted. "Have enough of the political and destructive games. Very sad day."

Later he tweeted: "Very proud to be part of Fifa's most improved team in 2011. Would like to thank the players and fans for an amazing journey."

BBC Sport Wales contacted Verheijen but he declined to make any further comment.

The Football Association of Wales confirmed Verheijen had tendered his resignation.

"The Football Association of Wales wishes to announce that it has today received the resignation of Raymond Verheijen," its statement read.

"The FAW accepts the resignation with regret, as Raymond was due to assist the Wales squad this week with the match against Costa Rica, a game being staged in honour of the Wales manager who tragically left us in November of last year.

"In light of the forthcoming match, and the sensitivities of it, the FAW has no further comment to make at this time.

"The FAW would like to take the opportunity to thank Raymond for his work over the last 12 months and wishes him well for the future."

New Wales manager Chris Coleman had said Verheijen and Osian Roberts would coach the team for the game at Cardiff City Stadium on 29 February.

However, there had been doubts over Verheijen's future ever since Speed's death in November, with the Dutchman having openly stated that he wanted to be part of Coleman's backroom staff and players including Wales captain Aaron Ramsey and Gareth Bale announcing publicly that they wanted Roberts and Verheijen to remain in their coaching roles.

Coleman said he had had a "positive meeting" with Verheijen in London but the Dutch coach, who has worked at World Cups with the Netherlands, Russia, South Korea and Australia, was never confirmed in the post and Coleman had admitted nothing was definite beyond the memorial game.

"We had a very good conversation for three hours, it was very positive," Coleman had told BBC Sport.

"We need to do this game for Gary and it is almost like everything is on standby as we all need to pay our respects to Gary.

"After that we can sit down and see where we are going forward."

More recently, Verheijen had accused the FAW of being "very disrespectful" for not inviting a former member of staff to Gary Speed's memorial match.

He claimed team operations manager Adrian Davies had been "sacked" and "will not be at" Wales' game with Costa Rica.

But the Football Association of Wales insists Davies was employed only on a match-to-match basis by Speed.

And on Monday night Verheijen tweeted: "Very surprised to hear from journalists I will be in charge of Wales vs Costa Rica game next week. Nobody of FAW has informed me about this."

The Welsh then have further friendlies against Mexico in New York on 27 May and against Bosnia-Herzegovina at home on 15 August.

Wales won four of their last five games with Speed at the helm, rising to 42 in the latest Fifa rankings having started 2011 ranked 113th.

Bellamy, who is close to Verheijen, had committed to playing against Costa Rica but said his international future was uncertain after that game.