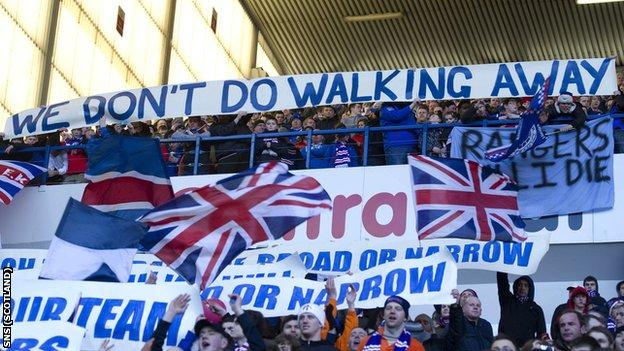 Rangers' security chief has hit out at the Scottish Premier League's decision to investigate alleged sectarian chanting by fans at Ibrox last weekend.

Offensive singing was mentioned in the SPL delegate's report and Strathclyde Police will be consulted before a course of action is decided.

But David Martin said: "We are disappointed the club is now the subject of an investigation by the SPL.

"Our fans have made tremendous progress in eradicating offensive singing."

Any action from the league would add to the Glasgow club's ongoing troubles, with Scottish champions now in the hands of administrators.

Martin told Rangers' website: "Last Saturday's match was one of high emotion following an extremely difficult week for the club.

"The fans' representatives themselves approached the club highlighting the raw emotion anticipated at the game, the variety of protests being considered and their concern that many people attending may not have been to Ibrox for some time.

"The club held a number of meetings and conversations with the football authorities, police and administrators prior to the match and everyone agreed that the priority on Saturday was to ensure there was no disorder around the match due to the highly-charged atmosphere that was anticipated.

"This was achieved before, during and after the match with 50,000 fans safely attending the game.

"To be clear, I am not saying there was an excuse for any offensive behaviour but, overall, the fans gave very positive support to the team and this should not be overlooked.

"The club has been consistent in its condemnation of such behaviour over many years and we are working with Strathclyde Police to identify individuals whom we know were engaged in offensive behaviour around the ground and we will take swift action against them, as we always do.

"No one is more disappointed than the fans themselves that some people's behaviour seems to have marred the tremendous support of the fans last Saturday."

The police reported that one sectarian-related arrest was made during the match.