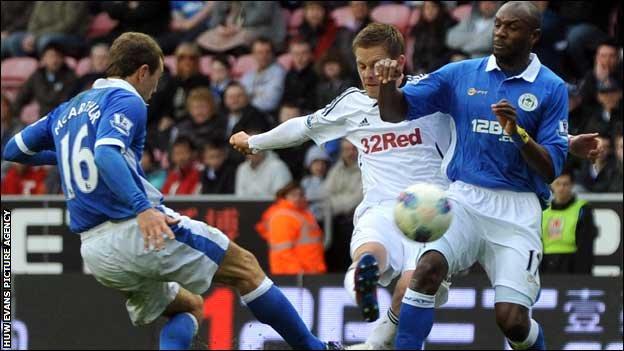 The Iceland international curled a stunning 20-yard effort into the top corner on the stroke of half-time to leave Wigan's Ali Al Habsi helpless.

Swansea ended the game with 10 men as Nathan Dyer was dismissed on the hour.

The winger was sent off by referee Andre Marriner for a high tackle on Wigan midfielder Jordi Gomez - but the Latics, who have won just once at home this season, lacked the creative guile, cutting edge and belief to take advantage.

Despite a late bombardment of the Swansea goal, the home side failed to create any clear-cut scoring opportunities.

Swansea and Sigurdsson, in contrast, were ruthless, as two beautiful long-range right-foot shots either side of the break deflated the hosts.

Sigurdsson had almost created an opening goal with an exquisite pass for Dyer, but the winger blasted the ball straight at Al Habsi when Danny Graham was well placed.

Wigan's best chances of the opening half fell to Franco Di Santo but the Argentine could not head in Jean Beausejour's left-wing cross while Swans stopper Michel Vorm kept out Emerson Boyce's far-post header.

At the other end, James McCarthy cleared a low Scott Sinclair effort off the line before Sigurdsson opened the scoring in first-half injury time, collecting Steven Caulker's chipped pass before cracking a tremendous dipping shot past Al Habsi.

Wigan rallied in the second half but Antolin Alcaraz's shot was blocked by Vorm while Di Santo's acrobatic goal-bound overhead kick hit Leon Britton in the face.

But any home hopes were dashed within 10 minutes of the restart.

Dyer was fouled on the edge of the box and Sigurdsson, on loan from German club Hoffenheim, fired the ball over the wall into the left-hand corner of Al Habsi's net with the Wigan keeper stranded.

Dyer's dismissal gave Wigan a brief lift but Swansea's defence kept them at arm's length as Mohamed Diame hit a few long-range shots and Di Santo had another shot blocked.

Substitute Hugo Rodellega wasted Wigan's best chance when the Colombian striker's shot was beaten out by Vorm as Swansea clung on to a third away win of the season that leaves them 11 points clear of the relegation zone.

Roberto Martinez's strugglers remain rooted to the bottom of the table having won just one of their last 12 league games and are two points from safety with the worst goal difference in the top flight.