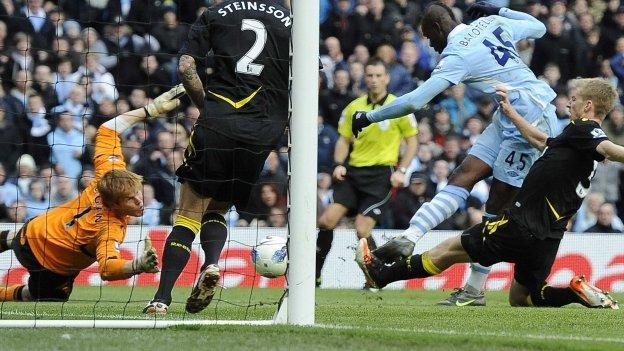 Mario Balotelli scored as Manchester City pulled five points clear of Manchester United at the top of the Premier League by beating Bolton.

The Italian had already hit the post when Gael Clichy's angled shot struck Gretar Steinsson on its way in to open the scoring in a flowing first half.

Darren Pratley also came close to a bizarre own goal when he hit the bar.

Before Balotelli's victory-sealing strike, Pratley dispossessed substitute Edin Dzeko before firing the ball against his own crossbar from 25 yards.

And it sparked City's second-half showing into life after they failed to match a stellar opening period in which they could have been three goals up in the first five minutes.

Once Balotelli had marked a return to form with his 14th goal of the season, City boss Roberto Mancini - who had rested the likes of David Silva and Sergio Aguero - could breathe more easily.

At the other end of the table, Bolton slipped two points behind their nearest relegation rivals after Blackburn and QPR both drew.

The Trotters remain 19th, level on points with bottom side Wigan, but they did cause problems for Mancini's men at times and must hope that translates into points when QPR visit next weekend in a crucial relegation clash.

Here, they had cause to be thankful to their keeper Adam Bogdan, who had a ongoing battle with an on-song Balotelli throughout the game and also saved Samir Nasri's early follow-up after Balotelli had hit the post.

The Italian also dragged a shot wide from a Johnson cutback and had a penalty appeal turned down on another occasion after Zat Knight appeared to drag him to the ground.

With Silva, Aguero and Dzeko on the bench for City, January signing David Pizarro made his first start for the club, easily slotting into the midfield and dictating much of City's rhythm early on.

But for all City's class, when the first goal came it was from an unlikely source and had a touch of fortune as Clichy's shot nicked Steinsson before finding the net.

Bolton might have caved in but the probing Nigel Reo-Coker ensured they posed a threat at the other end, and David Ngog drew a near-post save from Hart before the England keeper expertly tipped Arsenal loanee Miyaichi's shot round the post following a slip by Kolo Toure.

The Japanese forward, playing on the left of a five-man midfield, was Bolton's most dangerous outlet - but Bogdan remained the visitors' key man as he once again denied Balotelli after the break.

With the contest becoming more even, Mancini sent on Dzeko in place of Pizarro but, after Pratley's near-miss, it was Balotelli who finally got on the scoresheet to make the game safe.

Johnson dribbled past Sam Ricketts and Knight, before backheeling for Balotelli to turn the ball in from close range.

After the game, Mancini said he would speak to Balotelli before deciding