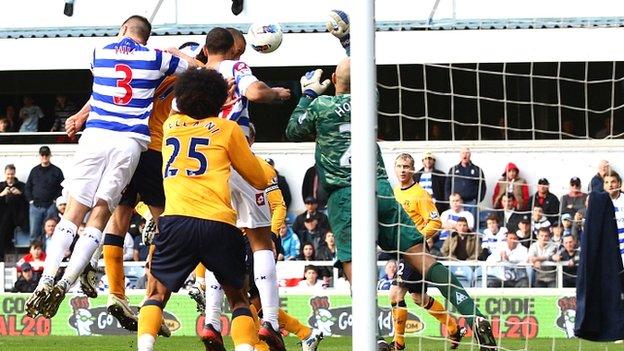 Relegation-threatened QPR came back from a goal down but were ultimately frustrated in the search for a winner as Everton held them at Loftus Road.

QPR's home form has been poor this season and they fell behind to Royston Drenthe's well-hit 25-yard strike.

But they showed greater spirit than in recent weeks to hit back with a headed equaliser from Bobby Zamora.

Both Adel Taarabt and Akos Buzsaky struck the post as QPR sought a winner, but Everton held out for a point.

Picking up points on your own patch has frequently been acknowledged as the key to Premier League survival for newly promoted teams. For QPR, however, home has been where the heartache is this season.

Coming into this game, Rangers had lost seven of 13 league matches at Loftus Road this campaign and were on a run of six defeats in eight matches overall. Hardly survival form.

During that run, they have also proved their own worst enemy, finishing games a man light due to red cards on five occasions, three of those coming in the last four home league matches.

On this occasion, they kept a full complement of players on the pitch and benefited with an improved display full of endeavour. With a bit more composure and luck they would have claimed a precious two extra points.

That they did not is a testimony to the solidity of an Everton side whose discipline and organisation means they have now conceded just 28 league goals all season and have extended their unbeaten run to six games.

Things appeared to be going according to form when Everton - who had already struck the crossbar through Tim Cahill's hooked shot - took the lead in the 31st minute courtesy of Drenthe's low drive, after Taarabt lost possession in midfield.

But Mark Hughes' men rallied and, after Taarabt had seen a free-kick deflected agonisingly wide of the post, levelled through Zamora's near-post header from Buzsaky's free-kick.

Buoyed by this, the home side finished the half the stronger side and would have led at the break but for Everton keeper Tim Howard's left-hand post denying Taarabt's curling 20-yard shot before Buzsaky somehow struck the other upright with the goal at his mercy seconds later.

Rangers continued to press in the second half but they were marshalled well by the visitors and restricted primarily to long-range efforts that failed to trouble Howard.

QPR will welcome the point but with six of the current top seven Premier League sides to play in their remaining 11 games they could well look back on this as two points dropped rather than one gained.

"I think we made it tough for them. We didn't allow them to play. I thought in terms of which team affected the game most, I think it was certainly the way we played.

"It has been difficult in recent weeks because you can't really effect the game when you have 10 men on the pitch whereas today I thought everybody put a shift in and was really up to the task."

"It was a hard-fought point. It was a difficult game with QPR fighting for their lives.

"We found it tough and it will be tough for anybody here on that pitch because it does not make for great passing. It will be worse for QPR who have to play all their home games on it.