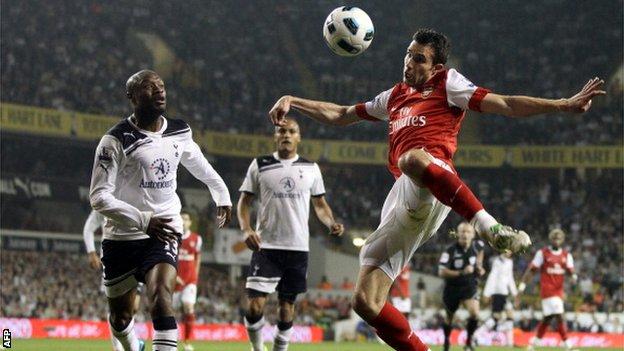 Robin van Persie has urged Arsenal to "set things straight" by beating Tottenham in the north London derby at Emirates Stadium on Sunday.

In the last 10 days, Arsenal have lost 4-0 to AC Milan in the Champions League and 2-0 to Sunderland in the FA Cup fifth round.

"What better way to set things straight again than to beat Spurs?" the Arsenal captain said in his programme notes.

"I would rather be playing them now than on any other day."

However Tottenham winger Gareth Bale believes Spurs are now in the ascendancy.

"Over the years Arsenal have been the favourites and they've been above us in the league but now the tide has turned in our favour," Bale said.

"We are playing some great stuff and I think we deserve to be where we are in the league and we deserve the favourites' tag."

Arsenal head into the game 10 points behind third-placed Spurs in the Premier League, only the since Arsene Wenger took charge that the Gunners trail their rivals.

Van Persie said: "They are above us for the first time in many years, but it is in our hands to change the way things are going, win the game and start moving closer to them.

"A draw will not be a good result for us on Sunday, either in our bid to catch up with Spurs or in our efforts to fight off our other challengers for a Champions League place."

Defeat in Milan left Arsenal on the verge of Champions League elimination, and they have been knocked out of both domestic cup competitions.

Spurs, by contrast, are well placed to secure an automatic Champions League qualifying spot and will reach the FA Cup quarter-finals if they win a home replay against Stevenage.

Tottenham beat Arsenal 2-1 at White Hart Lane in October thanks to goals from Rafael van der Vaart and Kyle Walker either side of an Aaron Ramsey strike.

"I don't think anybody would deny that Spurs have a really good side - and they've added consistency this season," said Van Persie.

"They are winning the tougher games and, as a result, have made that next step towards the top teams."