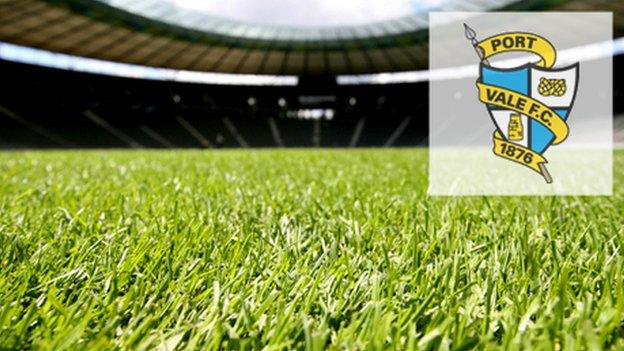 Port Vale have been put under a transfer embargo by the Football League because of an unpaid bill.

A statement by the League Two club read: "The club is unable to go into further details at the moment but is hopeful that the matter will be resolved soon."

The embargo means that they cannot complete the signing of 27-year-old midfielder Chris Birchall.

Vale are currently contesting a play-off place and sit eighth in the table.

Port Vale manager Micky Adams told BBC Radio Stoke: "I can't say this has been easy but I've seen it all before. I'm not a young manager who's never seen anything or is phased by it.

"My focus is trying to keep the players away from it as best I can and try and keep them focussed on getting results."

"It only goes to show that it's absolutely imperative, if we want Port Vale to survive, to remove this present board.

"Obviously now the Football League have looked at the situation and they can see there is a tremendous amount of debt at the club."

FC Business Magazine editor Ryan McKnight said: "It's massively serious because the Football League doesn't want to do these type of things.

"But they are trying to create a solvent and moral, from a business perspective, set of leagues and that is why they are being very heavy handed with clubs.

"It doesn't mean that Port Vale are going to be in administration on Monday, but it is a few steps towards the likelihood of that happening."