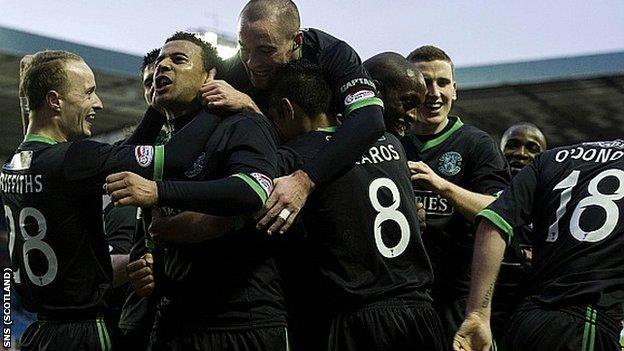 Pat Fenlon urged his team to maintain concentration after recording only his second league win as Hibernian manager, 3-1 away to Kilmarnock.

The victory takes Hibs three points clear of Dunfermline at the foot of the Scottish Premier League table.

"It's one win, nothing else. If we can get on a little bit of a roll, that will help us." said the manager.

"It's a massive game at home to St Mirren next week. It's important that we stay focused."

The goals we've been conceding have been down to a couple of things; not holding the ball in and not clearing our lines properly.

"I thought from start to finish we were very good. On another day, we might have scored a few more," said Fenlon.

"The first goal settled us down, but I thought we should have been two or three ahead by half time.

"We've got people chipping in with goals from all over the park. We've scored six goals in our last two games away from home and that's a good achievement."

And Fenlon says his team had got their game together at both ends of the pitch in Kilmarnock.

"The goals we've been conceding have been down to a couple of things; not holding the ball in and not clearing our lines properly.

"I thought today were very good at that."

Soares' goals were his first since arriving at the Edinburgh club in the January transfer window.

And his performance drew praise from his new boss.

"We contemplated playing him during the week but thought it might have been a little bit early coming back from his hamstring injury.

"He put in a great shift and took his goals really well."