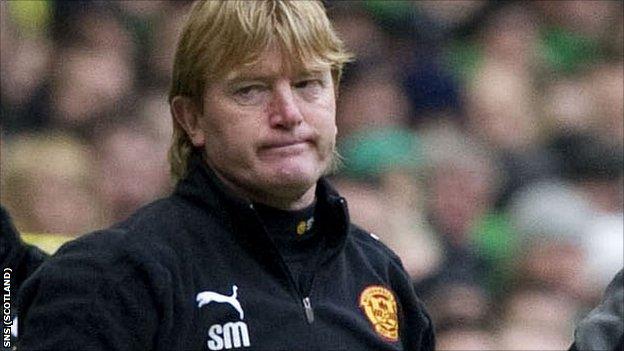 Stuart McCall says his focus is still third place in the Scottish Premier League despite missing a chance to move level with Rangers.

Rangers lost 10 points for entering administration and Well could have gone level had they not lost 1-0 to Celtic.

"We'll get to the split and see where we are, but securing third spot is our main aim at the moment," said McCall.

"We've just got to keep winning matches, and if we can get near Rangers then so be it."

McCall's team were beaten at Celtic Park, ending a run of six games without defeat in the league.

Gary Hooper scored the only goal of a game, when a long throw-in was laid into his path by Georgios Samaras.

"The huge disappointment is the goal we've lost," said McCall.

"If Celtic cut you open with the players they've got, we can accept it, but it was a throw in and we've lost the man - although it was a great finish."

And, although Celtic only scored once, McCall accepts that his own team did not do enough to come away from the east end of Glasgow with any points.

"I'm not saying we did enough in the final third to get anything out of it, but we pushed them close," he said.

"Especially the last 25 minutes, we got into areas and didn't have a shot, but I was pleased we kept going right to the end.

"We're disappointed to lose, but we take a lot of positives from it."