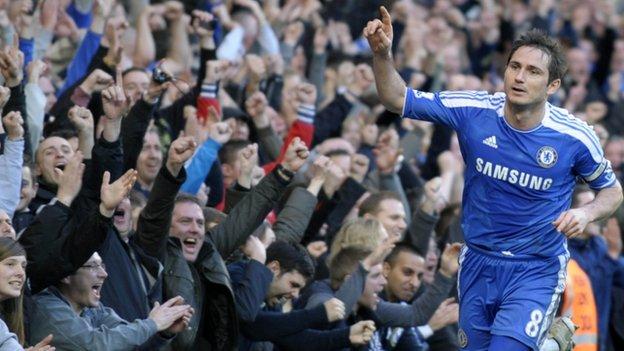 Frank Lampard has admitted his relationship with Chelsea manager Andre Villas-Boas has "not been ideal".

But, after captaining the Blues to a 3-0 win over Bolton on Saturday, he stressed his commitment to the club.

Asked about Villas-Boas, Lampard said: "I think, from the outside, you can probably see that it's not been ideal but the important thing is not to focus on individual relationships too much.

"It can only be negative and people do like to play on negatives."

Although Villas-Boas praised Lampard after the Bolton win, he said his display does not assure him of a place in the team.

The 33-year-old midfielder was dropped for the last two matches, including the midweek Champions League defeat by Napoli.

But he returned to lead the side against Bolton - and scored his 150th Premier League goal.

"There have been certain issues," Lampard said. "Certain players, we don't like not to play.

"But it's never a case of players throwing their toys out of the pram to the detriment of the club.

"It's in the club's interest. It's not about any one individual here and negative things can take the shine off it."

Villas-Boas said Lampard's performance was "fantastic" but added: "There are six players competing for those three positions [in midfield]. When we play with a number 10, it's even less. It's six players for two.

"Frank had a big, big day and it was important for him after the disappointment of coming out of the team against Napoli and Birmingham.

"He proved he can make the difference for the team. We always pick the team we think is best for the game and today he showed why he is one of the best.