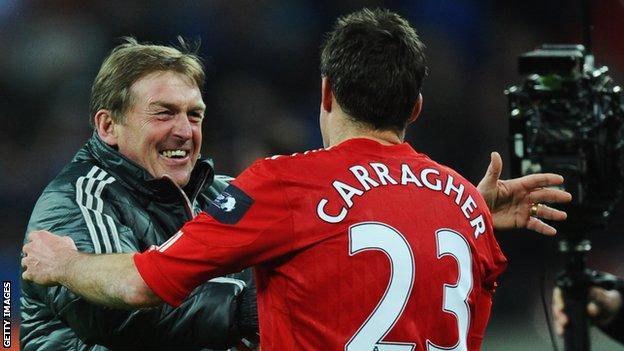 Liverpool boss Kenny Dalglish is confident that his side can build on their Carling Cup final triumph over Cardiff City and bring more trophies back to Anfield.

The Reds needed penalties to see off their Championship opponents at the end of a dramatic match - but Dalglish feels the celebrations that followed will inspire his players to further success.

"Although we have won something today, that is not us finished," the 60-year-old Scot said after his side's victory ended a six-year trophy drought.

"We don't want to stop here. We want to keep going.

"We've won it and we are going to really enjoy it. I know how much the players have enjoyed it and it gives you a wee flavour to come back and do it again."

Almost 26 years on from his first managerial triumph, the 1986 league title, Dalglish becomes only the seventh manager in English football to have won all three major domestic trophies of league title, FA Cup and League Cup.

He hopes giving many of his players their first winners' medals in English football will bring more glory.

"Does actually getting your hands on a trophy inspire you? I hope so," Dalglish said. "I think anyone who has ever won a trophy, whether it's at Wembley or wherever, has come away and said, 'I enjoyed that, I'd love to do it again'.

"If you do something and you enjoy it, you are going to want to do more of it, aren't you? It's not to say it is going to happen but you would think it was logical."

He praised Cardiff for pushing Liverpool all the way but felt his side fully deserved their victory - and said it justified the way they had approached the competition from the start.

"Right at the beginning, when we went to Exeter City in the second round, we said we wanted to treat the competition with respect," said Dalglish, "because, if we are doing that, we are treating the club with respect as well.

"We don't want to go and lose games. If we are playing in a competition then there is no way we are not going to try to win it.

"We have come through some hard games and we came through another tough one today.

"I feel for Anthony Gerrard after he missed his penalty but, for us, we are delighted to have won the trophy. It's been a very good day for us. We will just continue to work hard and see where it takes us."