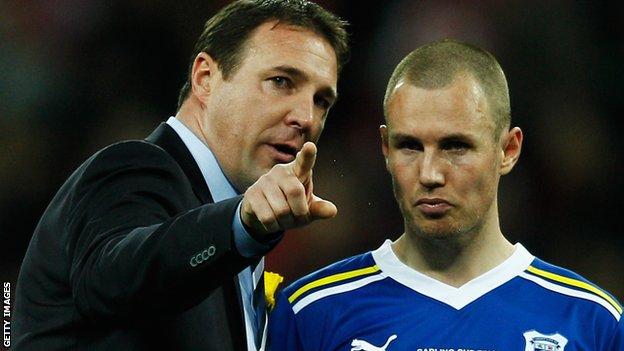 Cardiff City boss Malky Mackay has spoken of his pride despite his side losing the Carling Cup final to Liverpool on penalties.

The Bluebirds took the lead through Joe Mason before coming from 2-1 down to take the game to a penalty shoot-out.

And, after losing 3-2 on spot-kicks, the former Watford boss was a proud man at the final whistle.

"We wanted to come here and win today but the players have done the club proud," he said.

Martin Skrtel cancelled out Mason's strike in the second half and Dirk Kuyt thought he had won it for Liverpool with an instinctive extra-time finish, only for Ben Turner to bundle home at the death to force penalties.

"I think today we were playing against a top team and I think we have got a lot to be proud of," Mackay said.

"You have seen two teams who have put everything into that game."

Liverpool winger Stewart Downing described it as a "cruel way to lose".

However Mackay believes he will not have too hard a job lifting his players for next weekend's Championship match with West Ham as they continue their promotion push.

"Maybe if we had been beaten five or six, the question would have been valid," he said. "As it is, I don't think it is.

"We can take a lot of self-belief from getting to the final of a 92-club competition and taking a team at the top of the Premier League to penalties.

"We have 14 games to go and we are among 10 teams who can get into those play-off positions.

"We will patch up our squad and give it the best shot we have got from now until the end of the season.

"For most of them it's the first time they've been anywhere near something like this," he added.

"There is a lot of emotion out there because it is a young side and emotions are running high.

"We had a chance in the last minute of the game but Kenny [Miller] just blazed over. The way we came back, I'm so proud of them.

"We lost with dignity."