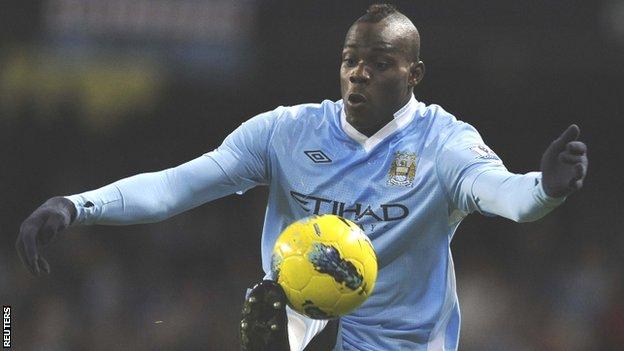 Mario Balotelli has been dropped by Italy coach Cesare Prandelli for his "agitated" behaviour on the pitch.

The Manchester City striker has been replaced by Roma's Fabio Borini, 20, for Wednesday's friendly against the United States in Genoa.

I don't want to see players who, at the first sign of difficulty, commit reaction fouls and get sent off

Balotelli was banned for four matches after a stamp on Tottenham's Scott Parker in January.

Prandelli said: "I don't want players who commit reaction fouls and get sent off. He seems a little agitated to me."

Balotelli has been sent-off three times since joining City for ÂŁ24m from Inter Milan in August 2010 and was punished retrospectively for his stamp on Parker.

Prandelli added: "When I say we have to reach the European Championship prepared, I mean I don't want to see players who, at the first sign of difficulty, commit reaction fouls and get sent off, leaving their team-mates to struggle with 10 men."

Balotelli has scored 13 goals in 25 appearances for the Premier League leaders, including one in their 3-0 win over Blackburn on Saturday.