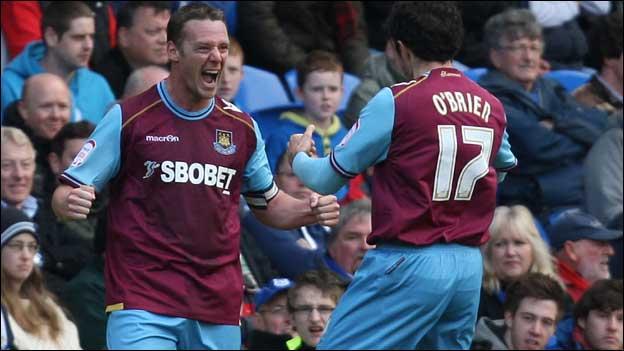 West Ham United kept up the pressure on Championship leaders Southampton with a comfortable victory over Cardiff City.

Cardiff were a shadow of the team that took Liverpool to penalties in last weekend's Carling Cup final but a Peter Whittingham free-kick hit the post.

George McCartney sealed the win as he fired in a close-range angled shot.

The Northern Ireland defender's first goal since November 2007 helped ensure West Ham move within a point of the top-of-the-table Saints with a game in hand as Sam Allardyce's men look for an immediate Premier League return.

The Londoners were always in control of the Sunday lunchtime encounter that saw Cardiff slip out of the play-off zone for the first time since November following a fourth defeat in five Championship games, their worst run of the season.

But the Bluebirds were architects of their own downfall as poor defending contributed to both West Ham's goals as Cardiff suffered a painful hangover from their brave League Cup final exploits at Wembley.

For West Ham's opener, Aron Gunnarsson inadvertently nudged the ball into Maynard's path before the Hammers striker played a lovely ball to Nolan for the midfielder to clip in his eighth goal of the season.

And for their second, full-back McCartney was allowed to run down the left flank, beating Cardiff right-back Kevin McNaughton.

His cross beat the dive of Mark Hudson before ricocheting back into his path off Ben Turner's leg for McCartney to squeeze the ball into the far corner of Marshall's net with an improvised right-footed finish.

Cardiff created half chances early on as Kenny Miller and Gunnarsson fired wide from long-range efforts but Jack Collison and Maynard gave the hosts a warning of what was to come as the visiting pair went close.

West Ham broke the deadlock just before half-time as Cardiff dallied on the edge of their own area as Maynard fed Nolan. The midfielder, who was returning from a three-game ban, opened his body up to beautifully curl a sidefooted effort around Marshall.

The Hammers had chances to double their lead when Ricardo Vaz Te capitalised on another defensive lapse by Cardiff but while his poked shot beat Scottish stopper Marshall, it did not beat Hudson, who cleared the danger.

McNaughton then gifted Maynard a free shot on goal, only for Marshall to get down well to deny the frontman.

McCartney's goal 13 minutes from time finished the Welshmen off although Miller did strike the crossbar with a close-range header in stoppage time but Allardyce's side rarely looked troubled.