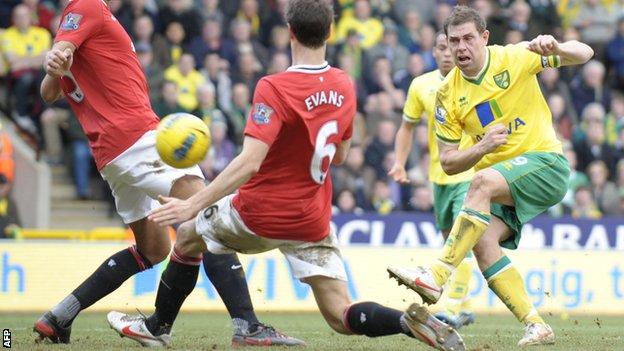 Norwich striker Grant Holt has played down suggestions that his current form could lead to an England call.

Holt, 30, is the joint second highest scoring Englishman in the Premier League with 10 goals this season.

Wayne Rooney leads the way with 17, but will miss Wednesday's friendly against the Netherlands because of illness.

Asked about his chances of being named as a replacement, Holt said: "I'm not holding my phone tightly in my pocket and waiting."

He scored Norwich's goal in a 2-1 home defeat by Manchester United on Sunday and has now found the net 65 times in 119 appearances since joining the Canaries from Shrewsbury for £400,000 in 2009.

"People can write and say what they want, but it's up to the people at the top to pick the teams. If they decide I'm not good enough, then that's fine," said Holt.

Manager Paul Lambert, who turned down a bid for Holt from Glasgow Rangers at the end of last month, is in no doubt that his striker is worthy of international recognition - as well as other members of his squad.

"If you're going by stats, he's up there with the best of them," said Lambert.

"A lot of the Norwich lads seem to be getting overlooked, maybe it's too far to travel."