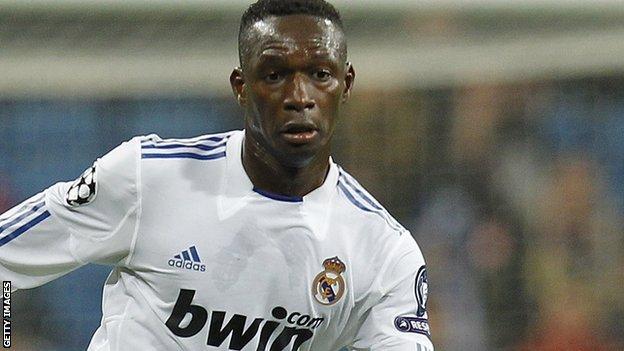 Former Real Madrid midfielder Mahamadou Diarra is to join Fulham until the end of the season.

Diarra, who reportedly cost Real £22m in 2006, won two league titles in four seasons with the Spanish side.

The 30-year-old Mali international has been a free agent since leaving Monaco last summer.

The move is subject to a visa being granted and includes the option of an extension until 2013.

Diarra was signed for Real by Fabio Capello and also won the Copa del Rey and Super Cup in 122 appearances.

At Lyon he formed a formidable midfield partnership with Michael Essien and was linked with Manchester United before Real moved in.

Diarra began his senior career with Greek side OFI Crete and then moved to Holland to play for Vitesse Arnhem.

After the successful spells with Lyon and Real, he joined Monaco on a free transfer but spent less than half a season there and left following their shock relegation fom Ligue 1.

He joins Fulham with Martin Jol's side 11th in the Premier League after Saturday's 1-0 win at local rivals QPR.