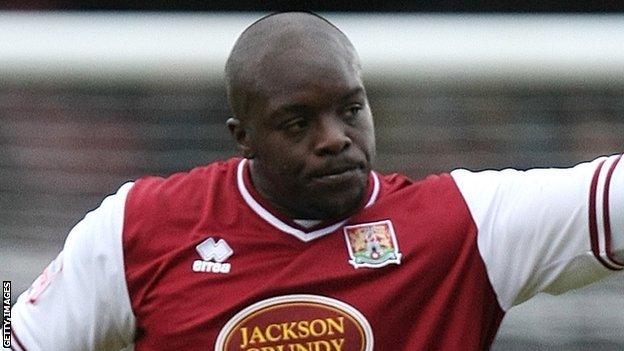 Akinfenwa scored in the 2-1 defeat by Port Vale, his 11th goal of the season, while Robinson and Williams are yet to get off the mark.

He told BBC Radio Northampton: "I know they're anxious to score their goals but they're putting in performances.

"As a forward, you are judged on goals, but [they] have worked hard."

Robinson was instrumental in creating Northampton's consolation goal on Saturday, but is still waiting for his first goal in 28 appearances, having arrived at the club in the summer.

Williams, who joined the club on loan from Reading in February, has only made three appearances so far, having scored twice in 13 for Rotherham games in a loan spell earlier this season.

Meanwhile, Akinfenwa acknowledged that the Cobblers need to dig deep if they are to improve their current position of 23rd and secure their place in the Football League for next season.

"We are disappointed, because coming off the two wins at home, in the first half (against Port Vale) we let ourselves down," said Akinfenwa.

"We've got to get on the training ground and then (go to) Cheltenham next week and get some points."