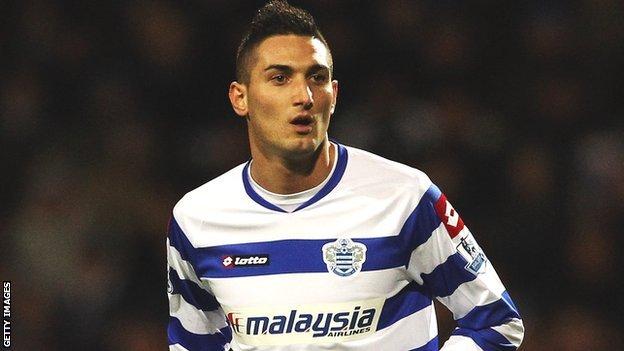 Manchester United striker Federico Macheda has been fined £15,000 by the Football Association for making homophobic comments on Twitter.

The 20-year-old, on loan at QPR, has been warned as to his future conduct.

Newcastle United's Nile Ranger and Walsall's Manny Smith were fined £6,000 and £1,200 respectively by the FA on 1 March for the same charge but Macheda had requested a personal hearing.

The fine for the Italian is the most administered for a case such as this.

All three players are alleged to have acted in a way which was improper and/or brought the game into disrepute.

Morrison was fined £7,000 by the FA in February after admitting a charge of using abusive and/or insulting words on Twitter, including a reference to a person's sexual orientation.

Ball, who also played for England, Manchester City and Everton, was fined £6,000 for tweeting about Coronation Street actor Anthony Cotton.

The FA launched a new six-year inclusion and anti-homophobia plan on 20 February called 'Opening Doors and Joining In', outlining its aims to rid the game of prejudice.

Macheda was signed for QPR in January by then manager Neil Warnock, and has made four appearances under current boss Mark Hughes.

The forward recently said he would delete his Twitter account, but appears to have tweeted since saying that.