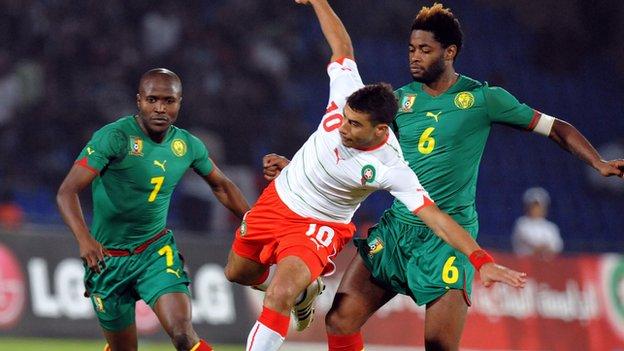 Cameroon's footballers will be paid match fees up front ahead of their Africa Cup of Nations qualifier against Guinea-Bissau this week.

The move is designed to avoid a repeat of the strike action which the national team took in a row over unpaid bonuses last year.

In a bid to avoid any further problems, the Cameroon Sports Minister, Adoum Garoua, and the head of the football federation Fecafoot, Iya Mohammed, are in the delegation going to Bissau.

Cameroon were amongst the biggest names missing from the recent Nations Cup in Equatorial Guinea and Gabon earlier this year and are determined to make it to the 2013 finals.

But their squad for the game is missing a large number of big names.

National captain Samuel Eto'o is serving a suspension for his part in the strike, as is vice-captain Enoh Eyong.

Jean Makoun and Benoit Angbwa are also missing, having excluded themselves in protest at the treatment of their two colleagues.

Young France-based defender Jean-Armel Kana Biyik - who has only just received clearance from Fifa to play for Cameroon, having represented France at youth level - has had to pull out with a knee injury.

He is the son of former Cameroon star Andre Kana Biyik and the nephew of Francois Omam-Biyik, who scored the winning goal for the Indomitable Lions in their shock defeat of Argentina at the 1990 World Cup, and his absence will disappoint many fans.

Stephane Mbia and Benjamin Moukanjo have also withdrawn from the squad because of injury problems.

The squad are travelling via Paris and are expected to arrive in Bissau later on Monday.

This is the first-leg of their tie - the second leg will take place in June.