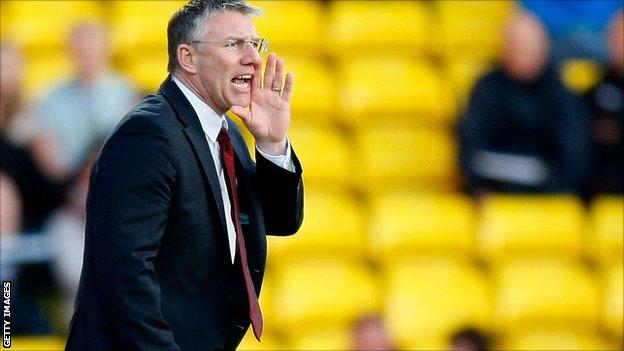 Southampton boss Nigel Adkins says his side are ready for the run-in as they chase promotion to the Premier League.

The Saints lead the Championship by a point following their 3-0 victory at Watford on Saturday although second-placed West Ham have a game in hand.

Adkins' side led for much of this season before a blip over Christmas allowed the Hammers to overtake them.

"We led the race for a long period of time and we lead it again now," Adkins told BBC Radio Solent.

Southampton have 13 games left and hold a five point gap over third placed Reading - who have a game in hand.

Adkins believes there will be further twists and turns along the way, but believes he has the squad to cope with the punishing fixture schedule.

"The league table I would imagine will still fluctuate and we've got to make sure we take one game at a time and deal with the situations as they arise," added Adkins.

"We've got a good strong squad of players, exciting players who score goals. If we can be resolute and keep clean sheets then I believe we've got goals in us as the team has already demonstrated.

"Our mentality is to win, but we also believe we can play good football. The prize is there for all to see but at certain stages it is about winning games of football."

He added: "We now enter March and April and they will be two really exciting months for the football club.

"There will be injuries, Adam Lallana went off after 20 minutes with a groin injury and Rickie Lambert has rolled his ankle on Saturday.

"So we will need our squad and I am lucky enough to have a good, strong squad of players. Exciting players, who can score goals."