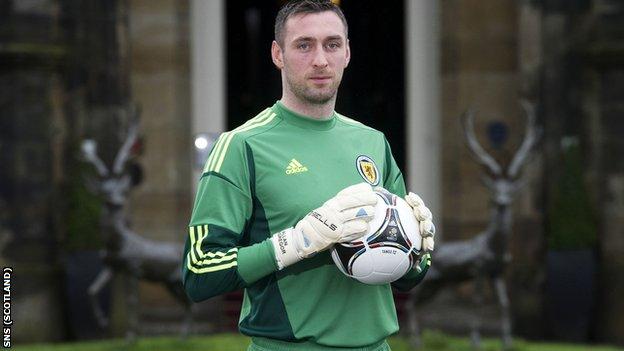 Rangers goalkeeper Allan McGregor intends to put the club's financial problems to one side and focus on the midweek friendly against Slovenia.

McGregor joined up with the Scotland squad ahead of Wednesday's game after starring in the win over Inverness CT.

With the Ibrox club in administration, speculation continues over the future of the first-team squad.

"It's always an honour to come away and play for your country whenever it is," said McGregor.

Rangers manager Ally McCoist remains hopeful of avoiding cuts to his staff but has a meeting planned with administrators Duff and Phelps.

Director of football Gordon Smith and chief operations officer Ali Russell will leave the club at the end of the month.

And Under-17 team coach Alan Kernaghan has left Ibrox to join Uwe Rosler's backroom team at League One club Brentford.

Every time I come away with Scotland, it's an honour to play. Hopefully on Wednesday night, it's the same thing.

McGregor was reluctant to discuss the club's financial plight, instead preferring to focus on Scotland's trip to Slovenia.

"I'm just proud to be here," he said. "I'm just here to play for Scotland at the moment.

"It's just one of those things. Every time I come away with Scotland, it's an honour to play. Hopefully on Wednesday night, it's the same thing."

Scotland assistant boss Peter Houston said he had no qualms over McGregor's ability to focus on the game against Slovenia.

"Allan is a great professional. He is maturing brilliantly and he is a fantastic goalkeeper," Houston said.

"He has been a top player for Scotland, certainly since I've been involved here with Craig.

"There are problems but he will put them to the back of his head. These guys are only thinking of one thing this week and that's the Scotland team."