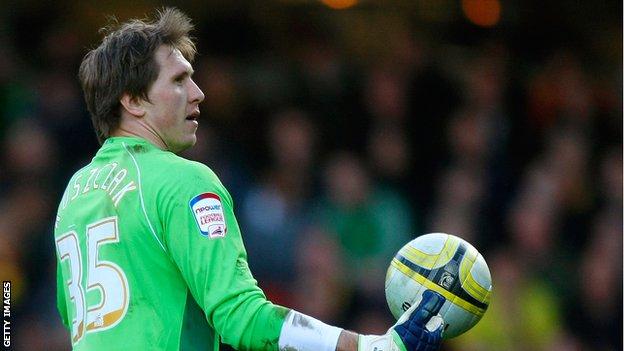 The Poland international, on loan from Manchester United, was caught off his line for Rickie Lambert's opener.

And the Saints striker went on to add two further goals in the decisive Championship victory.

But Dyche told BBC Three Counties Radio: "I've got no concerns over Tomasz Kuszczak. He will be fine."

The Watford boss continued: "We're not big finger-pointers here, we get on with it as a team. You score together and if you concede, you concede as a team."

Kuszczak, 29, could do little to prevent Southampton extending their lead but did pull off an impressive save from Tadanari Lee with the scoreline at 2-0.

It was the former West Brom shot-stopper's first senior game all season and Dyche says he will improve with more fixtures.

"He's made an impact in the way he goes about his business," said the Hornets boss.

"He knows what the script is with being a goalie. He's not played as much football as he'd like recently but he'll sharpen quickly.

"And to be fair, just before the penalty he made a fantastic save from short distance, so that's not a concern."