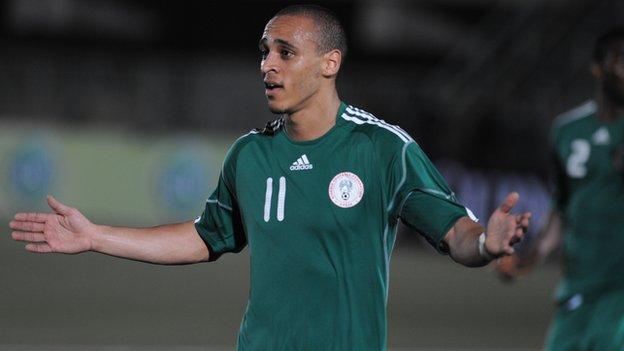 Nigeria striker Osaze Odemwingie has issued a rallying call to his team-mates as they start their campaign to reach the 2013 Africa Cup of Nations.

The Super Eagles failed to qualify for the 2012 edition, leading to the sacking of coach Samson Siasia.

"I think the period of claiming to be the giants of Africa is over," Odemwingie told BBC Sport.

We need to work harder, respect our opponents and fight together...

"Now we need to fight hard on the pitch and do away with the egos off it as well.

"We let ourselves and the country down by not playing at the last Cup of Nations, now we have a second chance to fix things.

"If we want to win back the support of our fans, we must go out and show them a strong reason to never turn their back on us."

The West Bromwich Albion forward revealed the frustration of watching the recent-completed Nations Cup on television.

"Sincerely, I couldn't watch. I've been playing in it since 2004 and missing out was very hard to deal with," he said.

"Collectively we all contributed to our failure to qualify - but we honestly need to change our attitude and mindset as players now.

"[We need to] work harder, respect our opponents and know that collectively we need to fight together to achieve success."

Former international skipper Keshi has named a squad with a blend of European and locally-based players in his bid to rebuild the faltering side.

With only six players recalled from the squad that failed under Siasia, Odemwingie admits the rebuilding process has already started under the "Big Boss".

"This is a direct message to us [players] that names and clubs can no longer guarantee you a call-up," the striker told the BBC.

"I think now I understand why the media and former players call him the 'big boss' - you either perform or face the exit door.

"Everyone has to earn their place on the pitch and that is an extra motivation and fresh challenge.

"If we want to be called the Super Eagles, then now is the time to prove it on the pitch and not on paper."

The game against Rwanda in Kigali is the first leg of the tie - the second leg will be played in Abuja in June.