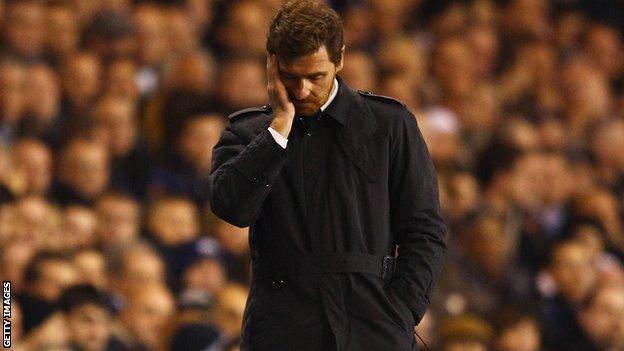 Andre Villas-Boas has admitted he fears for his future as Chelsea manager.

Villas-Boas, 34, has always said he has the backing of owner Roman Abramovich.

But in an interview with Portuguese radio station TSF he says he could go the same way as Carlo Ancelotti, who was sacked last May.

"It'll be one of two [reactions] - a continuation of the project and full support or just the cultural pattern that has happened before," said Villas-Boas.

"We don't know if it'll be tomorrow or in two years from now.

"It'll depend upon what is your understanding of what is happening at the moment."

Chelsea are 17 points adrift of leaders Manchester City and must overturn a 3-1 first-leg deficit against Napoli to reach the Champions League quarter-finals.

They also face an awkward FA Cup fifth round replay away to Birmingham on 6 March.

In the radio interview, which was broadcast on Monday, he added: "We are now in the exact same moment as last year. It is an exact copy.

"I think I have felt the confidence from Abramovich. But the pattern of behaviour of the owner has led to a downfall in similar situations or even 'better' situations."

Ancelotti won a Premier League and FA Cup double in his first season at Stamford Bridge before being sacked last May after a trophyless second campaign.

Villas-Boas, who cost Chelsea £13.3m in compensation, has endured a difficult start to his Blues reign after admitting that some of his players do not back his "project".

Meanwhile, Villas-Boas has hinted that, should he still be in charge at Stamford Bridge, Porto striker Hulk could be one of his top summer transfer targets.

The Blues may need to bolster their attack with Didier Drogba and Salomon Kalou out of contract at the end of the season.

"I see room for an explosive player on the wing, someone who is strong in one-on-one situations and Hulk fits that profile," added Villas-Boas.

"We have Kalou and Florent Malouda, both of whom are nearing the end of their contracts, while Juan Mata and Daniel Sturridge are the future.

"As such, there will surely be a place to fill."