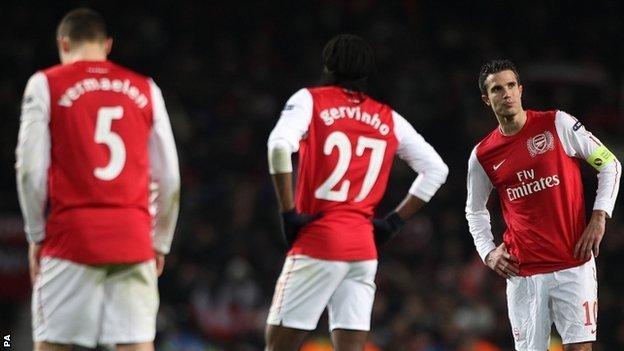 Arsenal scored three first-half goals but could not complete an epic comeback against AC Milan, who held on to reach the Champions League quarter-finals.

Milan, leading 4-0 from the first leg, were rocked when Laurent Koscielny headed home a corner and a mistake let Tomas Rosicky slot in Arsenal's second.

But the Dutchman missed a golden chance from close range and Milan had the best openings in a frantic end to the game.

Arsenal's night ultimately ended in glorious failure but the spirit and verve with which they went about a seemingly impossible task means they bow out of Europe with their heads held high.

That seemed unlikely after the insipid display by Arsene Wenger's side in the first leg last month, but this time it was Milan who quickly found themselves crumbling at the back.

The last team to overturn a four-goal deficit from the first leg of European competition remains Real Madrid, who beat Borussia Monchengladbach in the last 16 of the 1985/86 Uefa Cup by winning 4-0 at the Bernabeu after losing 5-1 in Germany

Arsenal made the perfect start when, after just seven minutes, Alex Oxlade-Chamberlain's dipping corner found Koscielny leaping unmarked at the near post to beat Christian Abbiati with a bouncing header.

Milan looked rattled and the Gunners kept finding gaps in their defence, with the in-form Van Persie a constant threat.

The Dutchman had two efforts saved by Abbiati and only a poor ball by Rosicky stopped him testing the Rossoneri keeper again after Urby Emanuelson gave the ball away in a dangerous position.

The Italian side, so dominant at the San Siro, were unable to impose themselves up front and were punished for another defensive error when Rosicky made it 2-0 after 26 minutes.

Walcott surged down the right past Djamel Mesbah - floundering on his Champions League debut - and when Thiago Silva was unable to clear his cross, Rosicky was in the right place to squeeze his low shot past Abbiati and inside the post.

Milan's only response was a long-range effort by Ignazio Abate which was easily dealt with by Wojciech Szczesny and things got even better for the Gunners just before half-time.

Alex Oxlade-Chamberlain ran at Mesbah and was sandwiched between the hapless Milan defender and Antonio Nocerino inside the box, with Van Persie slamming home the resulting penalty after referee Damir Skomina pointed to the spot.

At that stage, what would have been the biggest comeback in Champions League history looked within Arsenal's grasp.

Milan, who needed to score one goal to leave Wenger's side needing six to progress, missed their only real chance of the half when Stephan El Shaarawy fired into the side-netting after finding space inside the box.

Arsenal continued to threaten immediately after the break but their cause was not helped by a hamstring injury to Oxlade-Chamberlain, who was eventually forced off.

Their final clear-cut chance of the night came just before the hour mark, when Gervinho's deflected shot was saved by Abbiati, who got up brilliantly to keep out Van Persie's delicate follow-up.

While the Gunners tired, Milan at last seemed to find some organisation at the back and also began to come forward with intent at the other end.

Zlatan Ibrahimovic dragged his shot wide after latching on to a poor Szczesny clearance, but the Arsenal keeper also made crucial stops from the Swedish striker and El Shaarawy.

Nocerino wasted Milan's best chance when he fired straight at Szczesny from close range but, with the Gunners running out of ideas and seemingly out of steam in the closing stages, his poor finish did not affect the outcome.