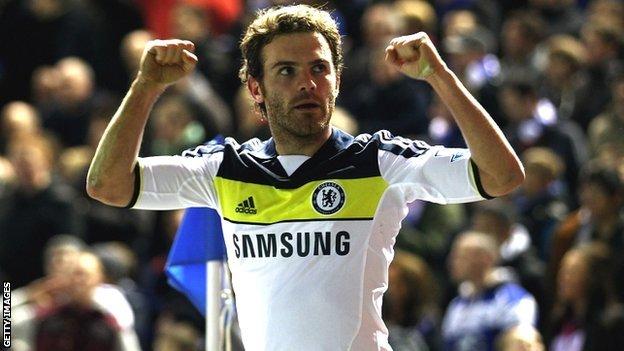 Chelsea started the road to recovery after the sacking of Andre Villas-Boas by reaching the FA Cup quarter-finals with victory at Birmingham City.

Roberto di Matteo took control after being handed the job until the end of the season - but had to wait 45 minutes for Chelsea to move through the gears before finally finding the quality to see off their Championship opponents in this fifth-round replay.

Juan Mata enlivened a dour encounter with a scrambled finish just after the interval and Raul Meireles swiftly followed up with a spectacular second to confirm a sixth-round meeting with Leicester City at Stamford Bridge.

Mata also saw a penalty saved by Birmingham keeper Colin Doyle - as he did in the first game at Stamford Bridge - on a night when Chelsea's supporters delivered their own vociferous verdict on who they want to see replace Villas-Boas, sacked by owner Roman Abramovich on Sunday after only nine months in charge.

The name of former Chelsea manager Jose Mourinho was chanted within seconds, along with support for Abramovich, but there was a chorus of abuse and disapproval at the prospect of former Liverpool manager Rafael Benitez emerging as a potential contender to succeed Villas-Boas.

At the final whistle Chelsea were able to see a shaft of light at the end of a dark tunnel as an ultimately comfortable victory ensured they moved a step closer to Wembley.

Chelsea captain John Terry was fit well ahead of schedule following knee surgery to take his place on the substitutes' bench, where he was joined by Didier Drogba and Frank Lampard.

Di Matteo called for Chelsea to show unity and passion at the start of yet another new era at the club and Mata almost gave the Italian the perfect start in the opening seconds when was denied by Birmingham keeper Doyle.

The giant figure of Nikola Zigic was leading Birmingham's attack and he was galvanised into action by anger when caught late by Chelsea defender David Luiz, sustaining a nasty gash near his eye.

He required lengthy treatment, returning as a man on a mission. The Serb picked up a yellow card for a reckless lunge at Gary Cahill then forced Chelsea keeper Petr Cech into a fine save as he headed Jordon Mutch's cross towards the top corner.

Fernando Torres had been involved in plenty of Chelsea's approach play but summed up his current plight on the stroke of half-time when he turned superbly on the edge of the area before sending his finish hopelessly wide.

There was an interesting sub-plot in the Chelsea game. Not only were the Chelsea fans chanting Jose Mourinho's name and singing that Roman Abramovich sacks who he wants, but there was a strength of feeling against Rafael Benitez, who has been linked with the vacancy. I'm sure Abramovich will be aware of that. There will need to be things that change if Mourinho returns to Chelsea. He will want total control over all matters including who is brought in and out of the club.

Chelsea started with greater purpose after the break and went ahead nine minutes after the restart. Birmingham failed to clear Ramires's cross and in the subsequent scramble Mata bundled in a finish Doyle touched but could not keep out.

Mata almost added a second minutes later when Branislav Ivanovic's cross touched off Curtis Davies, a deflection which slightly wrong-footed the Spaniard, who could only poke his shot wide.

It was only delaying the inevitable as Chelsea finally exerted their authority and Meireles sealed their place in the last eight in spectacular style on the hour. The Portuguese, signed by Villas-Boas, met Ramires's touch with a crisp strike from 20 yards that was still rising as it hit the roof of the net.

Meireles's celebrations were subdued, perhaps out of respect to his fellow countryman Villas-Boas, in sharp contrast to Di Matteo and his cohorts on the Chelsea bench.

Birmingham began to flag, understandably given the depleted nature of their side, and Chelsea had the opportunity to add a third after 69 minutes when Torres was hauled down by Guirane N'Daw.

Chelsea's fans chanted for Torres to take the spot-kick - as did the Birmingham supporters who mocked the struggling striker throughout - but Mata stepped forward and saw his effort blocked by Doyle.

Substitute Daniel Sturridge then wasted a chance before Mutch squandered an opportunity to give Birmingham hope, lifting a wayward finish over the top from Chris Burke's excellent pass.

Birmingham had been a credit to manager Chris Hughton, battling to the end despite the cause being lost, with Marlon King forcing Cech to punch his volley to safety.

It was the final moment of anxiety as Chelsea survived in comfort to allow Di Matteo to start his time in charge with victory and another step towards Wembley.