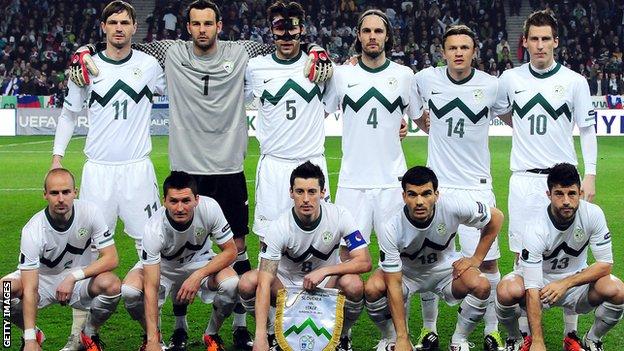 A small, Slovenian town on the Adriatic coast close to the Italian border hosts Craig Levein's latest test as Scotland manger as he prepares for World Cup qualification.

Koper - home to fewer than 50,000 residents - is more of a holiday destination than a football town.

But following Cyprus and a future trip to Florida, Levein is using sunshine resorts as a way of building towards what he hopes is a more fruitful campaign when the real stuff gets under way in September.

But, do not be fooled by the humble surroundings of this place or the modest 4,000-capacity stadium.

Wednesday's friendly is a real step up from the Cypriots, who were beaten 2-1 in November thanks to great finishes from Kenny Miller and Jamie Mackie.

Currently ranked 27th in the world - with the Scots' 48th - Slovenia have been to three major finals since the Tartan Army last had the pleasure in 1998.

Slovenian international football has been a series of ups and downs since the Yugoslav split in the early 1990s.

There has been two notable peaks.

The first was the team who made it to Euro 2000 under Srecko Katanic.

Despite finishing bottom of their group, they had a star in captain Zlatko Zahovic and lost just one of their three matches, drawing the other two.

A play-off victory over Romania took the Slovenians to the World Cup in Japan and Korea two years later, although they would fail to take a point in a group containing Spain, Paraguay and South Africa.

A barren period followed as goals in each leg of a play-off from the former Rangers striker Dado Prso saw Croatia go through to the Euro 2004 finals in Portugal at their expense.

It wouldn't be until a new breed of players steered Slovenia to the World Cup finals in South Africa in 2010 that they would return to a major tournament.

There, a defeat by England saw them just miss out on the knock-out stages.

Like the Scots, a place at this year's Euro 2012 finals eluded them, finishing a disappointing fourth in their group behind Italy, Estonia and future Scottish opponents Serbia.

Since then, they have installed a new coach in Slavisa Stojanovic, who can pick from an experienced squad.

Their two possible starters up front are national heroes.

Nejc Pecnik - who plays in Russia with Samara - and Zlatko Dedic - who is with German side Dynamo Dresden - scored the goals in the World Cup 2010 play-off win over Russia.

Midfield general Valter Birsa of Genoa has more than 50 caps and scored against the USA in South Africa.

In captain and goalkeeper Samir Handanovic, they have a penalty saving expert but who was beaten by a Ki-Sung Yeoung spot-kick for Celtic against his club Udinese in this year's Europa League.

And Rangers fans won't need reminding about one of the less experienced campaigners in the Slovenia ranks.

Uncapped Maribor striker Dalibor Volas is in the mix and is the man who scored the decisive goal at Ibrox in the second leg of their Europa League play-off in August.

This is one of just three games left for Levein's men before the Serbians visit Glasgow in September.

They say results aren't the most important things in friendlies: with Scotland, that doesn't ring true.