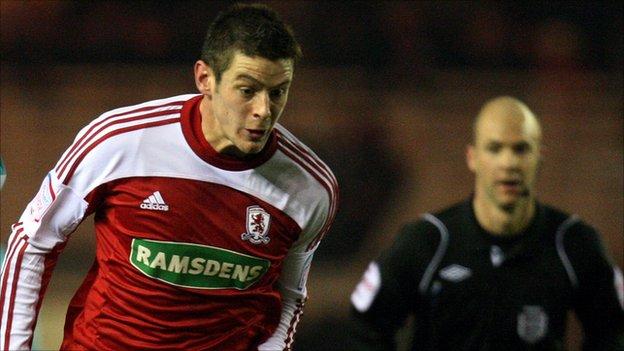 Middlesbrough striker Lukas Jutkiewicz has said there is extra incentive for the club to win at Portsmouth on Saturday, as he is a Southampton fan.

The 22-year-old was born in the South Coast city and has already experienced the atmosphere at Fratton Park during a spell with Coventry City.

"There were a few sections of the crowd that seemed to realise and had switched on and wanted me to know about it."

He added: "It's pretty intense [the South Coast derby]. For a long time they'd not been in the same league, so the fans got the chance to have another derby this season.

"So it's just an intense rivalry, just like any other."

Since swapping the Midlands for the North East for £1.3m in January, Jutkiewicz has also exchanged the battle in the lower reaches of the table for the tussle at the top.

Boro go into Saturday's game level on points with Cardiff who occupy the final play-off place and are four points off third, while City are third bottom, three points adrift of safety.

"I've been used to that pressure but it's a different kind of pressure," Jutkiewicz continued.

"At Coventry you go into the game, and you're dreading losing because you've known exactly what it feels like to lose a lot of games in a row.

"It's a much more enjoyable pressure to be under at the top of the league."

After beginning his career at Swindon, Jutkiewicz joined Everton but made just one appearance before joining Coventry in July 2010.