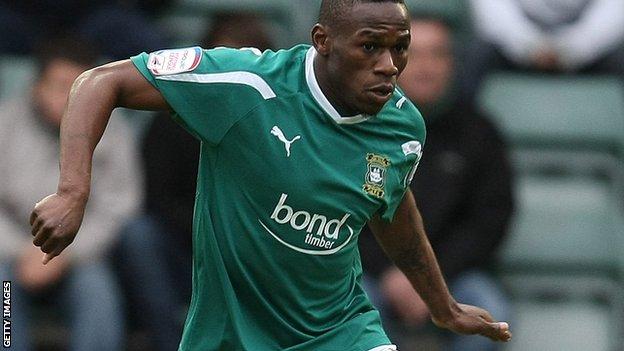 Plymouth Argyle manager Carl Fletcher feels that Onismor Bhasera's call-up for the Zimbabwe national team will be a welcome break for him.

The 26-year-old left-back has been called up for the .

Bhasera, who suffered in March last year, has won 18 caps for his country.

"Mentally and physically it might be a good thing for him to go back home and see his family," Fletcher said.

"He was out for such a long time with the injury (but) he's come back and played a lot of games for us.

"Sometimes you need that little break, maybe mentally more than anything, to recharge the batteries," Fletcher added to BBC Radio Devon.

And the Plymouth boss says Bhasera's absence is a good chance for Robbie Williams to show what he is capable of.

The 27-year-old former Rochdale man had not played since December before starting in place of Bhasera in the 0-0 draw with Dagenham and Redbridge on Saturday.

"Willo came in and did well on Saturday," Fletcher said.

"It's been hard for him but he came in and took his chance and that's all we ask."