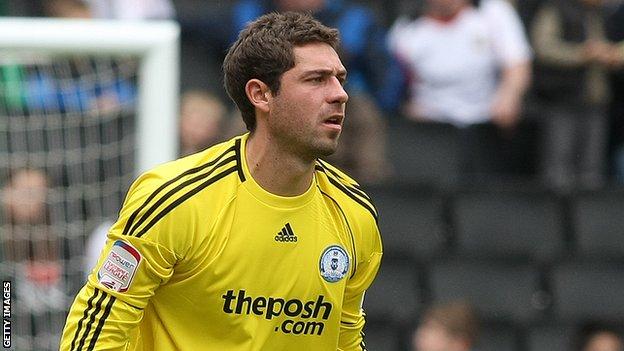 Peterborough United goalkeeper Paul Jones has said he has no concerns about rushing to renew his contract, which expires at the end of this season.

The 25-year-old has been preferred to team-mate Joe Lewis in the Posh's last two Championship outings.

"There is no rush, my priority is the games. I like it here, I'm settled," he told BBC Radio Cambridgeshire.

"I like the club, the supporters are great, we are playing in a great league so I'm really happy."

Jones started the season as boss Darren Ferguson's first-choice keeper, playing 21 times before being replaced by Lewis in November.

But the former Exeter man has reclaimed the spot between the posts after a 12-game spell out of the side.

"It's frustrating not playing. I found it quite difficult after playing for quite a lot of the season but I think I have dealt with it well," he added.

"It was fine between me and the manager, he gave me his reasons. I just got my head down, worked hard and got back in the team.

"I didn't feel any added pressure coming back in. I know what I'm capable of and I just had to go out there and play my usual game.

"You can't let things faze you. You can't get down you just have to keep level-headed and put in solid, consistent performances."