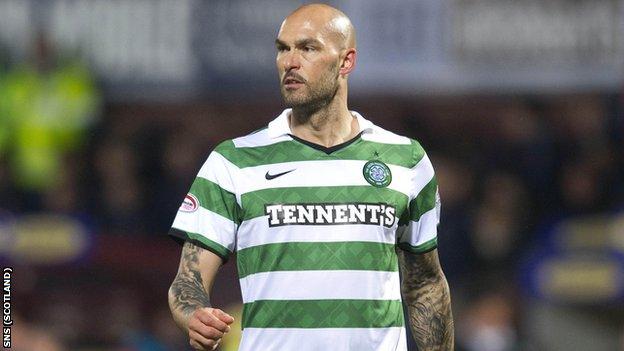 Daniel Majstorovic will miss Celtic's title run-in and the European Championship finals after rupturing his cruciate ligament training with Sweden.

But the 34-year-old defender has vowed not to let it finish his career.

"I will do all I can to get back as quickly as possible," he told the Swedish FA's official website.

"I still feel I have a lot to offer and I won't give up on my career just for this. At the same time, I fully understand how serious this is."

And Sweden head coach Erik Hamren does not expect the experienced centre-half to recover in time to be selected for Euro 2012.

Sweden are in the same group as England, France and Ukraine.

Majstorovic, who will be 35 in April, understands he faces a great deal of work to recover fitness and his club say they are monitoring his progress.

"Daniel will stay in Sweden for the immediate future and will have an operation there soon," read a statement from the runaway leaders of the Scottish Premier League.

"We will be in close liaison with the Swedish medical team to ensure that Daniel receives the best of care."

Majstorovic, who has only recently recovered from a fractured cheekbone, joined Celtic from AEK Athens in 2010 and his contract expires in the summer.

Manager Neil Lennon said in early December that he was planning to discuss an extended deal for the Swede.

However, Celtic have since signed up Polish defender Jaroslaw Fojut from Slask Wroclaw on a pre-contract agreement.