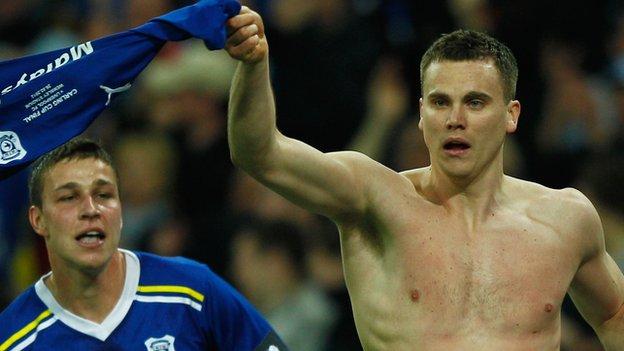 Chris Coleman has told Ben Turner he can expect a call to check if the Cardiff City defender wants to commit his international future to Wales.

Turner qualifies for Wales through his Welsh grandmother and the ex-England Under-19 centre-back has been watched playing for Cardiff by Welsh scouts.

The 23-year-old impressed in and Coleman wants Turner for Wales.

"Can he expect a call? Yes," said Wales manager Coleman.

But Coleman and the Football Association of Wales now plan to contact the 6ft 4ins defender officially in an effort to finally confirm the player's Welsh qualification.

Turner, who is currently keeping Wales centre-back Darcy Blake out of his favoured position, has confirmed that two of his grandparents are Welsh.

Turner has impressed for Cardiff since his summer move from Championship rivals Coventry City and was one of Cardiff's outstanding performers at Wembley on Sunday, scoring a late extra-time equaliser to take the game to penalties.

Turner has insisted he will not commit to Wales before being asked officially by Coleman or the FAW.

"Ben is on the radar - and especially after Sunday," said Coleman, who worked with Turner when he was Coventry manager.

"I had him as a young kid at Coventry, he had problems with injury but he seems to be overcoming that and he is now progressing and turning into the centre-half I thought he would be.

"We know he can head the ball, has a good left foot, is strong, quick and domineering but I wanted to see how he would be like against that type of player as international football is pretty similar to that, where players play in pockets and not come at you one-on-one.

"And I thought Ben Turner was outstanding, he was one of the best players on the pitch."

Turner could win his first Wales call for their 27 May friendly against Mexico in New York, providing do not qualify for the Championship play-offs in May.

His next opportunity to play for Wales would be the friendly with Bosnia-Herzegovina at home on 15 August.

Coleman would ideally want to bed Turner into his Wales squad before their opening 2014 World Cup qualifying match on 7 September.