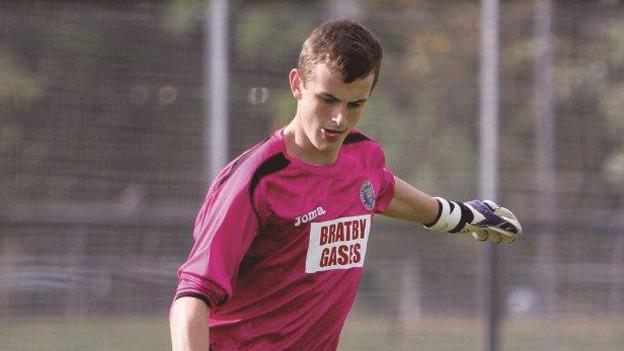 Shrewsbury Town are making something of a name for themselves on the goalkeeper development front.

Joe Hart, who came through the club's junior ranks, is now the established England number one and enjoying a fantastic career at Manchester City.

And following in his footsteps is 15-year-old Callum Burton, who has just made his debut for the England Under-16s in a 1-0 win in Spain.

Burton, from Newport, has been training regularly with the Shrewsbury first-team squad, and has caught the eye of Graham Turner on a number of occasions.

"He's a big lad for 15, he must be 6ft 1in already, and he's making good progress," said the Shrewsbury boss.

"In training he's faced first-teamers who have a fair shot on them and he more than holds his own.

Whether he's another Joe Hart - it's a bit early to say. But he's undoubtedly a very good prospect

"He's confident, good on crosses, and his distribution is decent.

"Whether he's another Joe Hart it's a bit early to say. But he's undoubtedly a very good prospect."

England Under-16s manager Kenny Swain has also been impressed by the youngster.

"Twice a year we have development programmes for various positions," he told BBC Radio Shropshire. "Callum came to one of our goalkeeping ones, did well, and the recommendation from the coaches was that he come to Spain with us straightaway.

"We need to see who's making the grade, who can cut it at international match level. He played the whole of the second half and he did well."

Burton was the only player in the squad not from a Premier League or a Championship club - and Swain is very positive about Shrewsbury.

"Everyone thinks of Joe Hart and the success he's had," he said. "Maybe they're growing a goalkeeping tree at Shrewsbury.

"Seriously though, it reflects well on their coaching staff.

"You do get clubs who seem to get the best out of certain positions - Blackburn have done it, West Brom are on that path, and now we've got Shrewsbury too."

Shropshire has another link with the Under-16s squad, Everton defender Arlen Birch coming from Ellesmere.

And, just a year ago another young keeper, Mason Springthorpe, was bought by the Premier League club from Shrewsbury for a hefty down payment of around £125,000.

Everton Under-18s coach Kevin Sheedy says that Springthorpe has had a mixed 12 months.

"He hasn't really been able to show us what he can do on a consistent level," Sheedy told BBC Radio Shropshire. "He's been very unlucky with injuries.

"But we're enjoying having him at Everton, he's working hard to reach full match fitness and we're looking forward to him showing us what he's capable of."