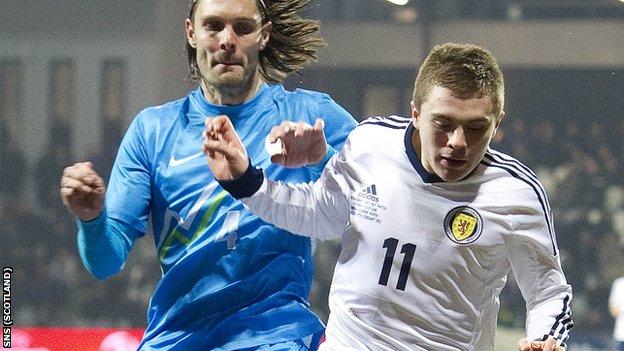 The Celtic star impressed after being promoted from the Under-21s, prompting Levein to tell BBC Radio Scotland: "He's a very exciting player.

"He's a young lad with tremendous ability. I wish we had another 10 like him but we don't.

"In time he's going to be a really fantastic player. All credit to him and Celtic for the way he has developed."

Forrest, 20, was chosen to play in Koper rather than for Scotland U21s in their key Euro 2013 qualifying match with the Netherlands, which ended 0-0 in Paisley.

Prior to the match, Levein explained the decision, saying that he expected the winger to be a key player in the forthcoming campaign to reach World Cup 2014.

And Forrest began the game brightly, with his close control and running ability putting the hosts on the back foot on several occasions.

James Morrison was the pick of Scotland's midfielders and Levein was delighted with the first hour of a keenly-contested game.

Morrison had shot pushed on to the woodwork before Scotland lost a soft opener to Andraz Kirm's header but they soon levelled through Christophe Berra's impressive header on 39 minutes.

"It was a worthwhile experience," added Levein.

"Maybe for 15 or 20 minutes in the second half the game died a death a little, we both made multiple substitutions and then the pattern for both teams broke up a bit.

"But, prior to that, in the first half, we played some excellent football and made some good chances.

"The inexperienced players will have gained enormously from this experience.

"The last 30 minutes, the game wasn't great but the first hour was good. We passed the ball very crisply in the midfield area.

"Charlie Adam, considering he played 120 minutes on Sunday, I thought was excellent, as was James McArthur and James Morrison. That balance worked really well.

"We passed it well and kept possession away from home against a team who are ranked higher than us in the Uefa rankings.

"There were a lot of encouraging things.

We have had a good experience, we have cemented some relationships on the pitch

Russell Martin failed to attack a cross ball as Kirm got in front to head the opener, after Charlie Mulgrew could not stop the cross following an initial challenge.

But Levein was generally pleased with the pair on their first starts after losing first-choice full-backs Alan Hutton and Phil Bardsley to injury.

"Strength in depth is important," said Levein. "We lost two really good players in the full-back area and the two boys who came in I was really pleased with.

"Charlie Mulgrew has been on top of his game with Celtic, and Russell Martin as well, I thought they were excellent."

Scotland ended the game sitting deep but more than held their own for the first hour or so. And Levein believes the trip will help in competitive games against the likes of Serbia, Macedonia and Croatia.

"This experience is invaluable to the players," he explained. "When we come away in similar situations in the World Cup qualifying campaign, it's good to recall this and remember we played a good match.

"It's a friendly match and I understand that but we have got the players together for three or four days, we have had a good experience, we have cemented some relationships on the pitch.

"I have got nothing but praise for the lads and also the supporters.

"They backed the boys and they can see some good class players and also some real promise for the future, what I consider to be really exciting talents."